I am constantly reminded about how lucky I am to live in the San Francisco area.  Margie Baker is one of those reasons.  She is one of the incredible entertainers I've met through my friendship with Shota Osabe, one of the best jazz pianists around.

Since his arrival in San Francisco in 1968, Shota has played with greats such as Liza Minnelli, Bob Hope and Dizzy Gillespi and many of our Bay area stars.  I first met him when he played for my favorite jazz diva, Sony Holland.  He accompanied her to Tokyo for her three month gig at the New York Bar at the Park Hyatt ( a real plus since he is Japanese and a native speaker! ).  Shota has two CDs of his own:  Happy Coat and Happy Count.

At any rate, Shota plays and does arrangements for a number of artists.  Margie Baker is one of them.  I first went to see her when Shota played keyboards for her at a San Francisco restaurant and jazz club called Shanghai 1930.  I fell in love with Margie, a delightful African American woman, over seventy, retired from the San Francisco school district with a doctorate in education!  Margie, originally from a small town in Texas, was born in poverty.  She moved here when her mother came to be a riveter during World War II building Navy ships.  Margie finished high school at fifteen, then went to UC Berkeley on a scholarship.  She finished up at San Francisco State and went to school nights for her masters and PhD.

Margie always sang but she didn't begin singing professionally until 1973.  When a guitarist friend coaxed her out of the audience to sing at  Henri's Room at the San Francisco Hilton, she was immediately hired by Baron and Conrad Hilton who were in the audience.  She sang at Hiltons for the next twenty years.

Currently she sings at several San Francisco area locales, including Burlingame's Hyatt Regency where she performs at Sunday brunch.  That's where I saw her today.  I join the "family" table off to the side where the musicians gather during their breaks and delight in being able to chat with Margie and Shota.  Also, it is wonderful to be so close when this amazing lady belts out a sultry blues number, or sings a sexy samba, or gets the joint jumping with, "When the Saints
Go Marching In."

I usually forego the $38.00 brunch and just get a latte and have a couple of hours of wonderful
music to begin my Sunday.  One song I especially like that Margie sings is "I Want a Pig Foot
and a Bottle of Beer."  That one appears on her CD, "Margie Baker and Friends Live at Bach Dancing and Dynamite Society."

All I know is that I leave the Hyatt on Sunday with a smile on my face, my toes tapping, ready to tackle just about anything, my aches and pains forgotten for a little while.  Thank you so much, Margie!  You are one hot tamale. 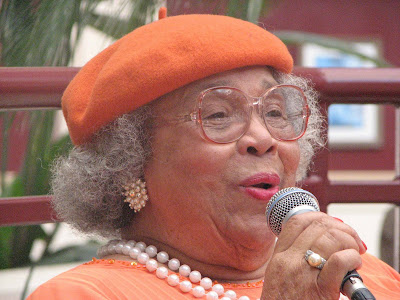 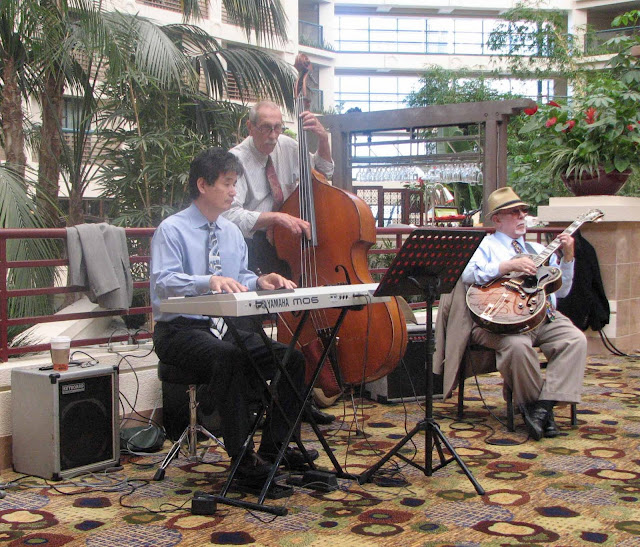 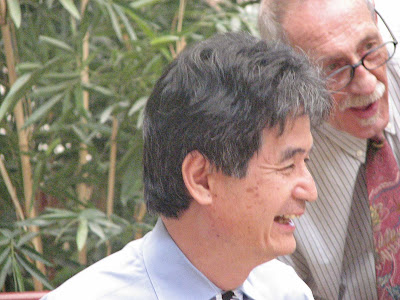