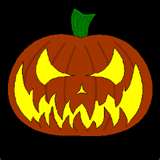 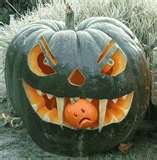 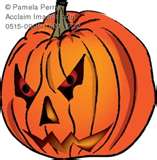 One Shock Sunday:  A Halloween Special - Haunted Pumpkins - October 31, 2010
For many months they grew,
On hills above the sea,
Kissed by morning fog,
Awaiting destiny.
At night, when all lay sleeping,
Evil spirits walked the rows,
And picked out certain pumpkins,
Made note of by black crows.
Instead of fertilizer,
The birds made sure each day,
That a ghastly preparation,
Was added to their spray.
As Halloween approached,
Those pumpkins, prized by all,
Were the first bought by the public,
The biggest and the small.
They went to towns all over,
The San Francisco Bay,
For thousands came from everywhere,
To celebrate that day.
No one ever knew,
That for one hundred souls,
Tragedy would befall them,
The spirits had to meet their goals.
Carmen Henesy
Copyright (c)  Carmen Henesy
All rights reserved
﻿
Posted by RNSANE at 10/31/2010 11:16:00 AM 12 comments:

Sundays in My City - Camelot Fish & Chips, Pacifica, CA - October 31, 2010
For my 34 years in the San Francisco area, I've lived in San Mateo County, close to
San Francisco - either in South San Francisco, Pacifica or Daly City.  For that entire
time, Camelot Fish & Chips has been in existence ( it originated in 1969, seven years
before I moved from southern CA where I'd spent one year ).  I passed it thousands of
times, primarily going to the Pacifica post office which is located right across the street
from the ocean - or to the Bank of America ATM or Safeway.  Camelot is right there
with all of them.  I'm not sure why I never stopped for a meal!
On Tuesday, after I mailed my packages, I finally decided to stop in.  My healthy
breakfast had given way to gigantic rumblings and dinner was still several hours away.

I found myself in a very atmospheric place, filled with memorabilia of England - pictures
of Lady Di, the Queen, Guinness ads, flags, etc and a great assortment of fried fish and seafood choices.  Of course, I had to have the big combination called "The Camelot" - it included fish, 3 shrimp, 3 oysters,3 scallops and fries ( $10.75 ).  Only calamari were
missing and I don't see why they couldn't have added a few of those as well.   I restrained
myself from ordering a side of mushrooms and sweet potato fries.   I finished everything
except except a few fries and washed it down with a wonderful draft of Guinness
( I'm normally not a beer drinker except for the dark kind ).

All in all, it was quite tasty though I'm not overly fond of fried food any more.  If I could
have gotten a grilled seafood plate with the same choices, I would have really been
happy.  I wasn't crazy about the tartar sauce but the malt vinegar was fine.

Nothing could really compare with my visit to British friends in Rye, England and eating
at the fish and chips place, right on the beach, that they took me to there.  Camelot is
the best of its kind that I've had, thus far, in the U. S.  Given a choice, though, I'd opt for
grilled seafood anywhere rather than fried.
Oh, yes, later, when I was reading up on the place, I found that, for dessert, they serve a
fried Mars Bar.  I'll go back in just to try that, if for no other reason.
﻿
﻿ 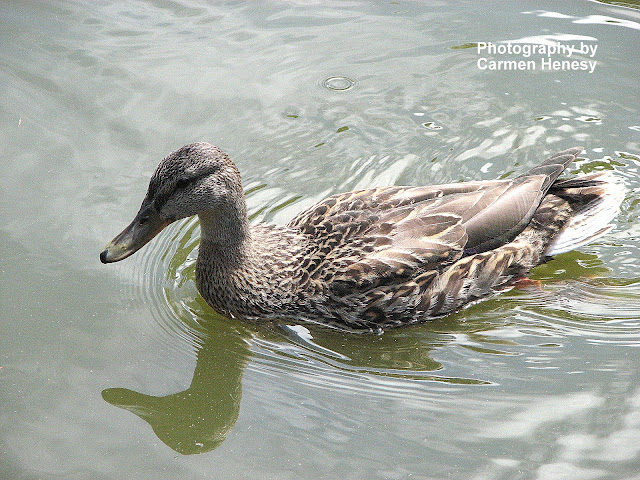 Things that go bump in the night,
Really give me a fright,
I'd rather be home and not seen,
And go candyless on Halloween.
There'll be be witches and goblins about,
Doing all sorts of evil, no doubt,
I'm afraid I'd fall under their spell,
And plunge my lilly white soul into hell!
Poor me!
Carmen Henesy
Copyright (c)  Carmen Henesy
All rights reserved.
I'm participating in Flash 55 Friday, brainchild of G-Man aka Mr. Know-it-all.

Congratulations, GIANTS, you did it again!
Keep it up in Texas!

Fabulous and fantastic pretty much describe our San Francisco Giants!  Needless to
say, this city by the bay celebrated big time last night as its baseball team won Game 1
of the world series.  I've never been a great baseball fan myself but, regardless, I always
support my home team and, like so many others, I sat glued to the t.v. set to watch the
opening game against the Texas Rangers.  I can just imagine how exciting it must have
been to be among the crowds at AT & T Park at Willie Mays Plaza!  Of course, there is
something to be said for being with your family at home, enjoying a dinner of Country
Captain ( an Indian chicken curry dish ) and Carmen's Caribbean Cocktails and not
having to wait in traffic to get home after the game.
Our Giants did the fans proud and we are hoping for another win tonight.  We'll be right
there cheering you on. 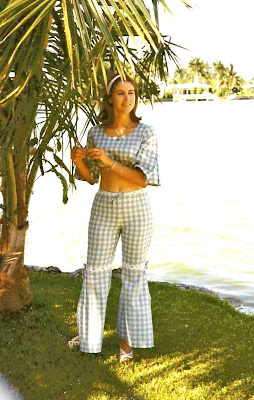 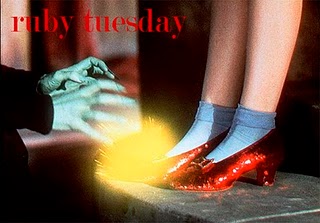 ﻿Ruby Tuesday - From The Botanical Garden, San Francisco - October 26, 2010
This beautiful oasis, midst cable cars climbing halfway to the stars, scenic Bay vistas
and some of the best eating in the United States, is a special place to visit at any time
of the year.  It is a sanctuary to all, offering a moment of respite from the stresses of life. 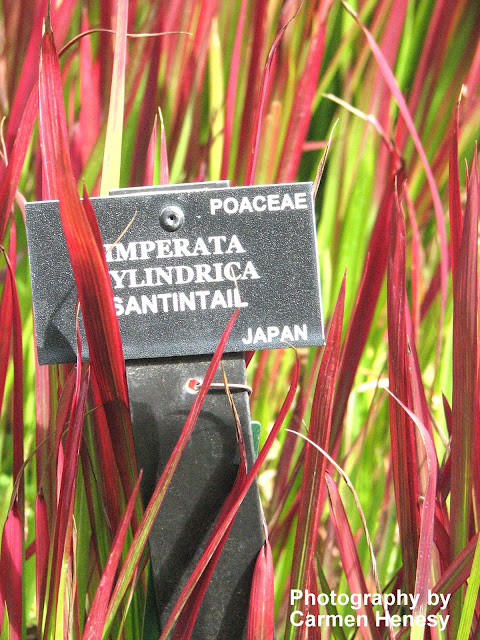 ﻿Mellow Yellow Monday - New Orleans Drive In Daiquari Bar - October 25, 2010
When I arrived in New Orleans forty-eight years ago to start nursing school at Charity
Hospital, the legal drinking age was  eighteen.  We, however, did not have any
drive through daiquairi bars.  They still did not exist when I moved away in 1969.  At
some point in time, in recent years, I noticed several when I visited.  I'm not sure they
are such a good idea, though, since they don't seem to discourage drinking and
driving.
When I was there last week for my nursing school reunion and my friend was driving,
we stopped so I could get my first ever "drive through daiquiri" and some photographs.
I can't say the quality of the drink was superior.  Give me a Sazerac at one of the great
bars in New Orleans...none of this drive through stuff for me!! 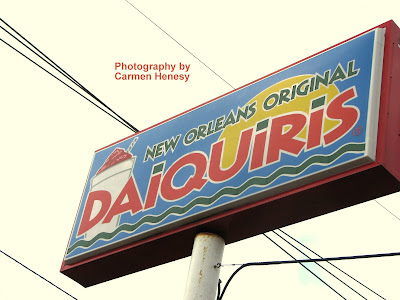 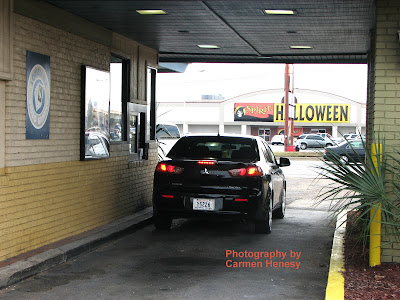 It beats drive by banking, I guess! 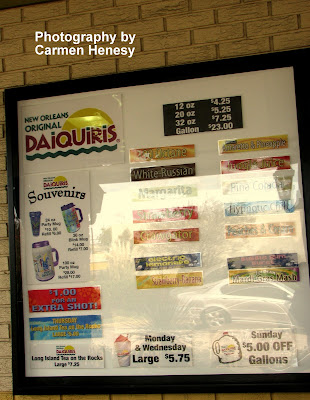 ﻿Sundays in My City - New Orleans Scenes - October 24, 2010
I thought I would post more pictures of my visit to New Orleans since that's where I was
last Sunday.  In between my 45 year nursing school reunion functions, my friend and I
drove around the city.  Much has changed, of course, since our student nurse days but
much has not.  Roads are terrible - part of New Orleans is at - or below - sea level and
the constant flooding when it rains, contributes to the constant disrepair of roads.  There
is still much that hasn't been repaired since Katrina and it is so sad to see houses still
boarded up.  The Quarter is much the same, though, and the Cafe du Monde was packed
at all hours of the day and night with folks wanting their beignet and coffee fix!
Magazine Street shotgun house
St. Charles home
Another St. Charles house 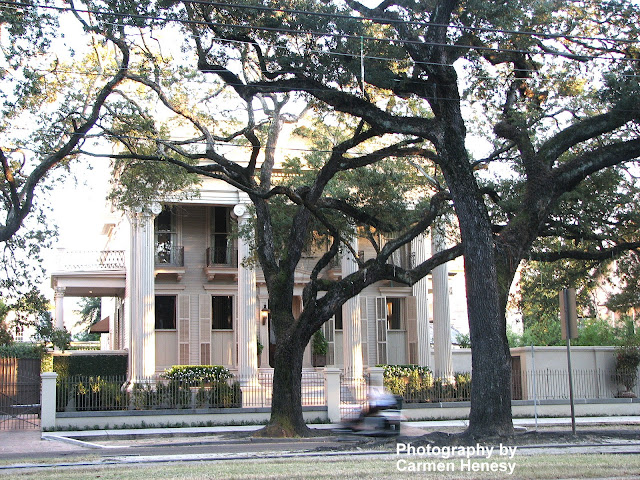