Twenty-five years ago, at this time, I was weary of leading a very off balance existence and waddling with a weird gait.  My ankles were a thing of the past and my disposition ranged from surly to moderately unpleasant.  When I began having intermittent contractions, I was delighted.  "Let's get this show on the road", I muttered to the football player cavorting in my womb.  However, as he was to do for quite a few years to follow, Jeremy demonstrated he had a mind of his own.

I waited impatiently until my contractions were five minutes apart and then headed to Mt. Zion Hospital in San Francisco,  I had driven that same route many times for my first few years in the "city by the bay", having first worked on their child and adolescent psychiatric unit and then in the operating room.  Once on the delivery unit, things moved swiftly, a bit too quickly!  It seems that traffic, and my stopping to chat with colleagues ( my mouth always gets me into trouble ) allowed labor to progress nicely!  Jeremy was ready to see the light of day and my epidural hadn't been given.   I was rushed toward the delivery room, yelling, "Wait, wait, I can't deliver.  I haven't had my epidural."  Well, you know what, my youngest son, all nine pounds, eight ounces of him arrived very quickly thereafter, sans epidural!  Of course, he did aspirate a little meconium and was soon whisked away to the intensive care nursery.

When I went there to visit him, he seemed quite strange, the jolly giant in the midst of all the little neonates, outweighing them by five to seven pounds.  He looked as though he was stuffed in the incubator.  Fortunately, his sojourn there was very brief.

For the first year of his life, Jeremy was bald....no hair at all, just a shiny noggin.  I did
incantations, considered transplants, and asked his pediatrician if the kidney stone manipulation
I had undergone in the 7th month of pregnancy, with its radiation, could have affected Jeremy's hair follicles.  Dr. Bernsten merely laughed and told me to be patient.  At last, the day arrived and gorgeous golden tendrils grew.  I could hardly bring myself to cut it!  It wasn't till his late college years that he let it grown again.


Jeremy is my "baby."  He is a wonderful young man and I am very proud of him as I am my other two sons.  He is part of the "testosterone trio" that has made up my household.  He graduated from Cal Poly, San Luis Obispo, in June 2008, with a degree in kinesiology, after having gotten an A.S. in fire technology two years earlier from College of San Mateo.  He played high school football and did track and, during his college years, he was a decathlete.  I never knew a thing about track and field but I learned a lot sitting through those ten events over the years, wondering if my 6'4" son was going to break his neck flipping over those poles.  I was always less anxious about the throwing events. 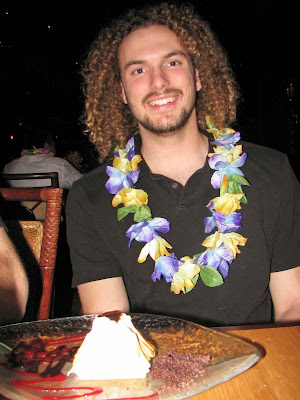 Since I am not  at home, I don't have photos of his new look handy though you can see him, before and after his haircut ( the curls went to "Locks for Love" ) and photos of my other sons in my blog, "Only Six Months to Go."

I'm sorry I am not home this year to wish you a happy birthday in person, son.  You know that I love you very much and that, even though I was hoping for a girl, I wouldn't trade you for all the daughters in the world.  I appreciate your love and concern for me and, even though I may complain about your efforts to get me to exercise and get off some of these excess pounds, I KNOW that you are only wanting me to have a better and healthier life.


It seems like only yesterday that you made your debut on this earth.  I found this poem I once wrote for you so I thought I would add it to this post.  Happy quarter of a century, dearest Jeremy.

Born as bald as you could be,
You were a massive brute,
It took a lot of pushing,
To get you down that chute!

By the time you turned age two,
You'd sprouted golden curls,
And were looked upon with envy,
By a horde of little girls!

You and Alex drove me mad,
More than once a day,
Playing Ninja, and emulating,
Shawn in every way!

You did the unforgivable,
Disclosed his liquor stash,
Stored behind a dresser,
it was emptied in a flash!

Middle school was painful,
We seemed to always fight
And yet, at times, you'd fill me,
With absolute delight.

High school passed so quickly,
Football star and such,
How did a gangly six-year-old,
Ever grow so much.

College is astounding,My son so strong and tall,Brilliant, curly, decathlete,You seem to have it all!
Carmen Henesy