While I was born in Columbus, GA, I was an Army "brat" so my early years were spent in various places - Ft.  Bragg, North Carolina, Salzburg, Austria, Frankfurt, Germany, interspersed with stints back here at Ft.Benning, GA and in Columbus.  My first year of high school, I attended boarding school in Cullman, AL before coming back to attend Columbus High School for my last three years.  I didn't make many local friends, except for other Army "brats" like me.  One exception was Luther Stanton, whose family was Columbus born and bred.  He was, if I recall, designated the class "most handsome" and quite a catch.  He had a great sense of humor and had a propensity to goof off quite a bit.  I took pity on him and would often tutor him  when he needed a little help with his studies.  He would always try to include me in school activities and events which I usually declined.  I just never felt I fit in.

After graduation, I headed to New Orleans to nursing school but my friendship with Luther continued.  Whenever I would be home for holidays, we'd get together and he came to visit me in New Orleans.  A few years passed and Luther began dating a lovely young Columbus High student, Beth ( her maiden name escapes me ).  They ultimately married and moved to Houston, TX where I frequently visited a nursing school classmate from Charity Hospital - and, of course, I always saw Beth and Luther.  The Stantons ended up moving back to Columbus, GA which was nice for me.  I always had my dear friends to see when I went to my home town.  Interestingly, Luther had a cousin living not too far from me in northern CA so we would occasionally get together on the West Coast.

About fifteen years ago, when the Stantons were at their cabin on the Chattahoochee River back waters, Luther met with a debilitating accident.  He was on his jet ski when someone plowed into him, causing mutliple fractures and injury.  Airlifted to the Medical Center in Columbus, he spent days in ICU and underwent repeated surgery.  With hundreds of prayers bombarding heaven, the love of his wife, Beth, and his incredible positive outlook on life, Luther survived all surgery and osteomyelitis - and I still have my wonderful friends to visit when I'm home.

Saturday night, they picked me up and took me over to their home for pizza and the World Series.  I got to meet the yellow lab they saved from extermination in the very nick of time.  Their

beloved, eight -year-old,   Molly, also a yellow lab, died recently, a devastating event for them.  Beth had been checking out the animal shelters for another yellow lab.  When she was notified that there was a dog at the pound, her daughter went over and met a sweet, but rather forlorn creature, who had a growth on her ear and who was infested with fleas and had ear infections.  Somehow, as Jennifer started to leave, the dog gave a bark and that did it.  Beth called Luther and the rest, and a couple hundred dollars later, is history.  Lucy, in a little more than a week, has been neutered, has has a tumor removed from her ear, has completed a course of antibiotics and is one of the sweetest dogs I've ever seen.  She loves Luther and Beth and the feeling is totally mutual!  Molly's dog spirit must have been there, playing matchmaker! 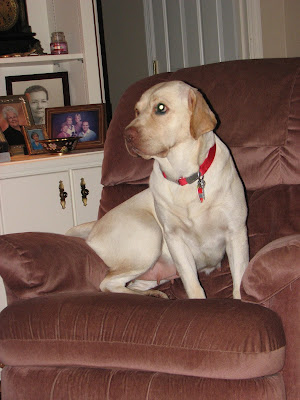 This is Lucy.  The vet thinks she is about 2-years-old. 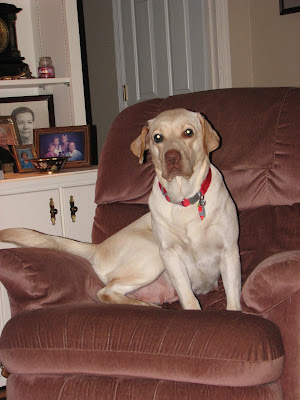 Already, she is so bonded to Luther and Beth! 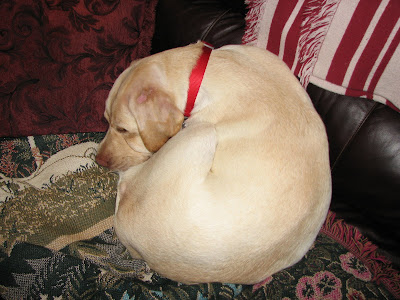 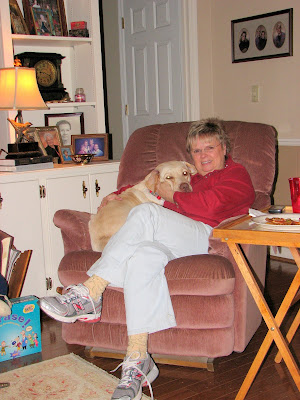 I think I am more the lap dog type...who says it's only for the pekinese? 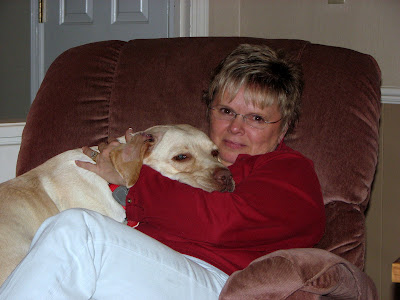 Ohhhhhhhhhh, Beth is so soft! 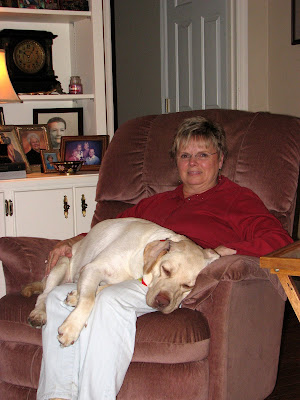 When Luther and Beth found out I hadn't rented a car, they insisted I take Luther's little truck to use.  What wonderful friends I have! 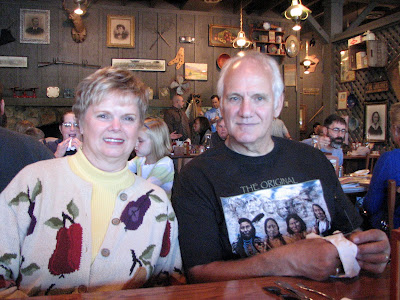 Here they are - Luther Stanton, my friend of FIFTY years...I cannot believe that much time has

gone by ( till I look at his white hair ) and his lovely wife, Beth

I cannot thank them enough for their love and friendship for half a century.  When we are together, it seems like we are back in high school.  In spite of our aches and pains and the white hair ( I thank the scientists at L'Oreal, etc, for maintaining mine at a color more like that of my youth ).