I am blessed to have a wonderful Indian friend, Rohan Saraf, who is a senior beverage
manager at Royal Caribbean International.  Of course, we met on one of my cruises, a
number of years ago and he became part of my crew "family."  Rohan's home is
Kathmandu, Nepal, an ancient and historic city that is surrounded by four mountains of
the Himalayas.  When I visited India fourteen years ago, I only got to Mumbai, Delhi and
Agra but, if I ever travel that way again, I pray I might see Kathmandu!  Even if Rohan
isn't home on vacation, I will see his his mother, Surjit, and his father.  I feel like I already
know them.

Besides being an excellent beverage manager, Rohan has become an incredible
photographer.  Some of his efforts are truly breathtaking and could easily win awards.
I've asked his permission to use some of his shots in my blog and he has been kind
enough to allow me to share his pictures with you from time to time.  Perhaps when he
retires from Royal Caribbean, he'll join the ranks of outstanding Indian bloggers and
photographers himself!

My Mellow Yellow picture this week is of puppets he took during his vacation from ship
life.  I found it most delightful as I am sure you will. 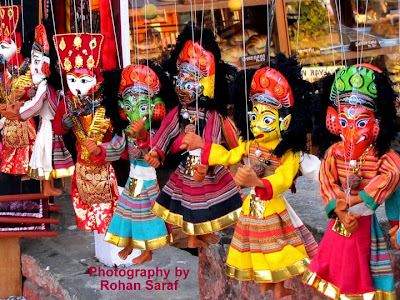