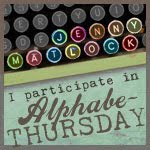 "Y" is for Yesterday - Alphabe Thursday, July 8, 2010
The Beatles recorded "Yesterday" in 1965 as one of the songs on their album, "Help."
Wikipedia reports that "Yesterday" has the most cover versions of any song ever written and "it
was performed over seven million times in the 20th century alone."  No wonder it achieved the
status of best song of the 20th century in a 1999 BBC Radio 2 poll of music experts and listeners.  A year later, "Yesterday," was "voted the #1 Pop song of all time by MTV and Rolling
Stone Magazine."  It was inducted into the Grammy Hall of Fame in 1997.
While "Yesterday" was attributed to being written by Paul McCartney and John Lennon, Paul McCartney is its sole author.
I would be surprised if there is anyone around today, except perhaps the youngest of children
who does not know this song.
Here is a You Tube video of "Yesterday."  It certainly plunges me into nostalgia.