Noe Valley Houses, Sunday in My City, July 4, 2010
San Francisco's Noe Valley neighborhood lies in the central part of San Francisco  While some of its beautiful Victorian era homes have a two million dollars price tag, when it was built up at the end of the 19th century and the beginning of the 20th century, it was basically a working class neighborhood.  The houses were built in rows and Noe Valley has the greatest concentration of row houses in San Francisco.
Noe Valley has become a more upscale community now with numerous restaurants, shops, and much higher priced real estate.  The weather there tends to be some of the best in San Francisco.
House climbing hillside in Noe Valley
Hillside landscaping
Bird of Paradise 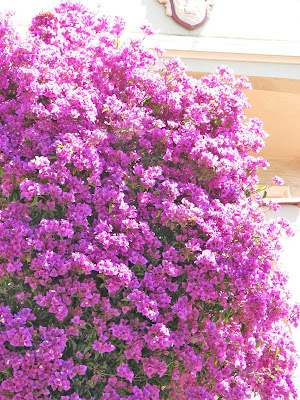 Bougainvillea
This lovely Noe Valley drive is part of  Unknown Mami's Sunday in My City - check it out and
join in the fun.
Happy 4th of July to our good old USA - and a special rememberance to all of our
Armed Forces deployed on foreign soil protecting our liberty and freedom!
Our prayers are with you!
Posted by RNSANE at 7/03/2010 11:34:00 PM