﻿Flash 55 Friday - Happy 40th Birthday, Shawn - December 17, 2010
Forty years ago today,
A blizzard howled outside,
But the contractions I was feeling,
Couldn't be denied!
In treacherous conditions,
We drove for forty miles,
But when Shawn finally exited,
My face was full of smiles.
First born of three, Shawn set the pace,
And his brothers soon were giving chase.
Happy birthday,  oldest son!
I am taking part in Mr. G-Man's Flash 55 Friday - check it out and see what the others have done!
Shawn Edward Smith
12 - 17 - 70
It's hard for me to believe, Shawn, that you are already forty-years-old.  How is that
possible?  It seems like only yesterday, I was waddling about, having gained 50 pounds
during my pregnancy, setting up the nursery in the apartment your dad and I rented over
a veterinarian's office in Lexington, Massachusetts, just outside Hanscom Field where
your father was a Lt. in the Air Force.  ﻿
I woke early the morning of December 17th, about 5AM, if I recall, because I was having
some cramping and my membranes had ruptured.  We were in the throes of a major
snowstorm and, after I took a shower, we had about forty miles to drive to the hospital.
When we looked out the window, the snow had stopped but our car was buried. 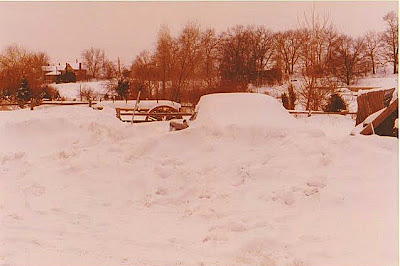 December 17, 1970 - Lexington, MA
The car broke down a few miles from Chelsea Naval Hospital but, fortunately, we were
next to a gas station and the owner took us the rest of the way, in his truck, which had a
snow plow attached.  They gave me an epidural which slowed down my labor and you
didn't arrive till that evening.  Your grandmother flew up right away to spend a week with
us since she was en route to Thailand for six months because your grandfather was
stationed there.  She adored  you! 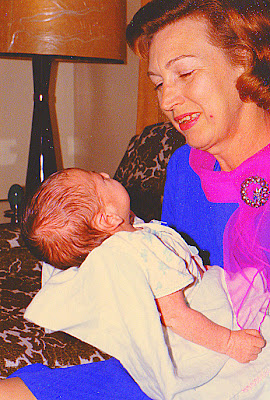 ﻿Newborn Shawn with Grandma Quinlan
You were only﻿ eight days old your first Christmas but Santa managed to find you and  you
were the best Christmas present I ever had!
﻿ 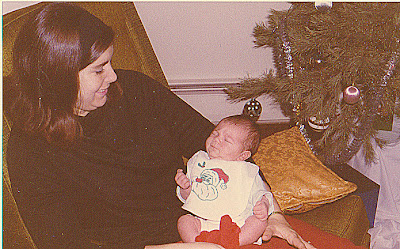 Our collie, Snoopy, became your constant companion.  He slept beside your crib, lay
next to you if you were lying on the floor, and would follow whomever had you in their arms. 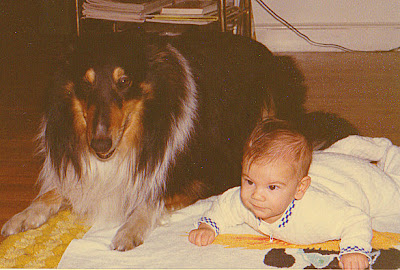 Your dad was a private pilot and a member of the base aeroclub so﻿, when you were two
months old, we rented a Cessna and flew from Boston to New Orleans so our dear friend,
Father Gerard Poche, who had performed our wedding, could baptize you.  Auntie Meaux,
who had been my maid of honor, was also your godmother.  That trip began your love of
travel -I think I transferred that to you in utero!! 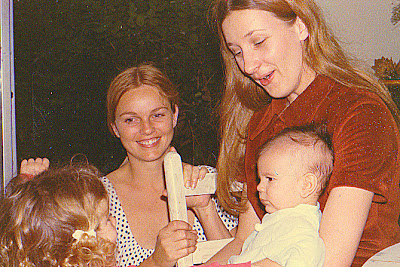 Here you are in Auntie Meaux's lap with Aunt Carol & Lara looking on.
One Saturday, we rented a Cessna 150 and flew up to Bar Harbor, Maine for﻿ a feast
of  steamed clams and lobster.  In fact, we had the same meal for both lunch and dinner.
Ed got this shot of you, sitting on top of the Cessna.  Though it's a little worn with time,
it's one of my favorite pictures of you! 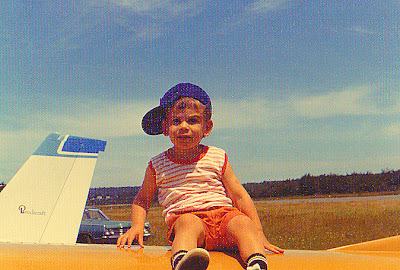 Of course, we couldn't let you celebrate your first birthday, without a trip to my favorite
place in the world - San Francisco.  Your dad and I had flown from Boston to New
Orleans to get married, then we'd honeymooned in San Francisco.  So we took you
when you were about nine months old.  What a perfect day we had at the Golden
Gate Bridge!! 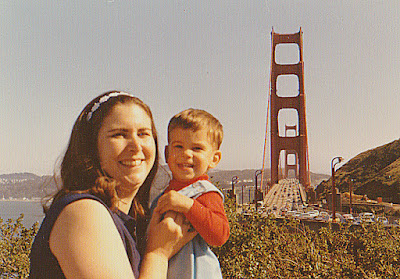 For your first birthday and your first haircut, we were visiting Grandma and Grandpa
Quinlan in Columbus, Georgia. 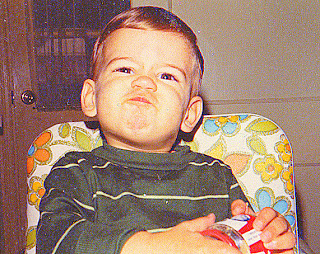 Your second and third Christmases, we were stationed in Tampa, Florida.  We had traded
snow for much warmer temperatures and we bought our first house! 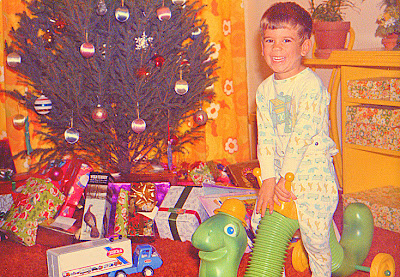 ﻿
You celebrated your fifth birthday in southern California, then the following year, your dad
stayed in the Fullerton house and I brought you to the San Francisco area to follow my dream. 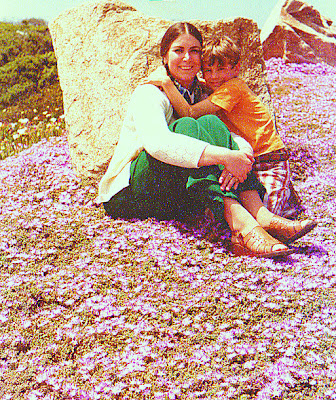 For eleven years, you were an only child, jetting back and forth to visit your dad in
Fullerton and hanging out with your friends in the San Francisco area.  When I remarried
and brought a baby brother into the scene, you were terrific, even changing dirty diapers,
on occasion. 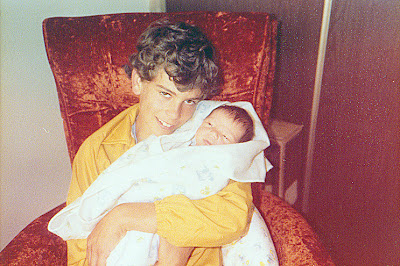 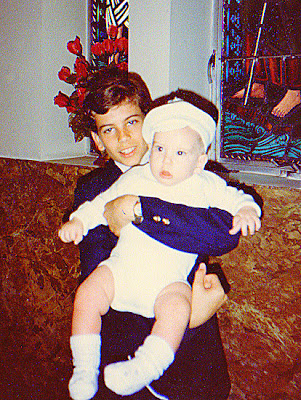 ﻿
Two years later, when Jeremy arrived, you took it all in stride and got used to having two
toddlers following after you and your friend, Tim.  It gave him good practice for the two
children he now has.  You, still single, said you don't plan to marry and, if you do, you
don't plan to have children.  "I've already raised two!"  And that you did.  When I was
disabled for a year and a half following extensive back surgery and the father of the boys
left ( they were only one and three ), I couldn't have made it without you. 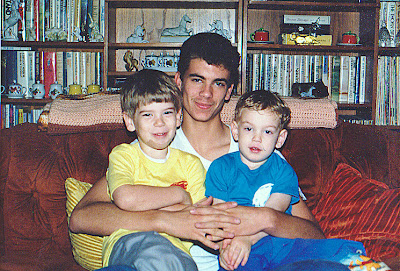 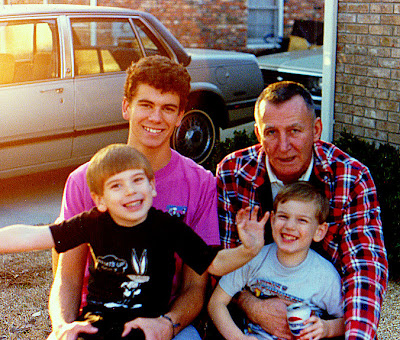 Shawn, Grandpa Quinlan, Alex & Jeremy
Your dad, Ed, and Lois, your "other mother", came up for your high school graduation.
Lois and I couldn't believe how closely you resembled your father, even to all your
little mannerisms.  The three of us, also, couldn't believe how long it was going to take
you to get your electrical engineering degree from San Jose State.  The next time we
gathered together for that occasion, you were 34-years-old.  Of course, you did do
some Air Force active duty time in there!﻿ 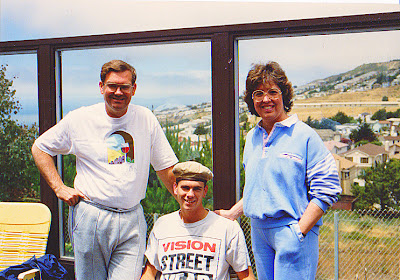 You got quite a workout with your brothers until they finally got taller than you ( they're
now 6'4" to your 5'10" - I think that's your height ) and both were football players - so,
eventually, you couldn't win the wrestling matches, not even against just one of them.
Face it, kiddo, you're getting old.
At 21, when you decided to go into the Air Force Reserves and left home for basic
training and then six months of tech school, there was a major sense of loss around
here.  It was very exciting, though, to go to San Antonio to see you graduate.  I can't
remember but you did so with honors and you were dorm chief or something like that -
and your drill Sgts. were WOMEN!  And you could fold your underwear into a two
inch square! 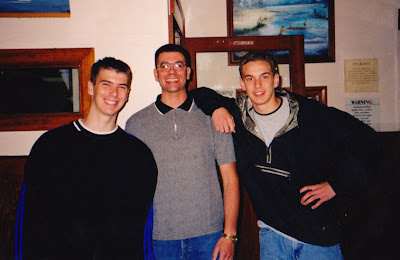 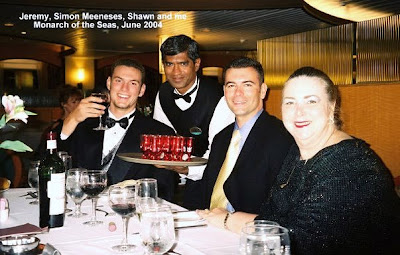 I just want to say how much I have enjoyed having you for a son.  We have shared
a home for a lot of years and you are very good company.  I appreciate all the ways
you've come through for me over the years ( I finally believe, after years of working
on the navigation systems for the C5 and C17 that you really can take my computer
apart and fix it ).  Our talks about travel, food and wine are a joy and you are more
than just a son, you are a friend.  I think you are also more than just a brother to
Alex and Jeremy, you are their friend and were there when their father wasn't.  I was
just so sorry that the Air Force sent you to Germany one week before Alex and
Laura's wedding.  You missed a great occasion and you should have been part of it. 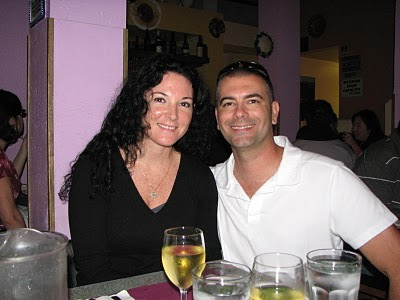 ﻿Shawn, aka, George Clooney ( his Air Force boss calls him that! ) and his friend,
Dawn, at my 66th birthday celebration
Happy birthday, Shawn!  Take your milk thistle and enjoy many, many more birthdays..
I am very proud of you as I am sure Ed and Lois are, too.
Mom
﻿
﻿
﻿
﻿