Th6is morning, I had an email from a dear friend in the Philippines, in a comment
about her advancing years ( she is at least ten years younger than me ).  I can so
identify with her statement, "Everything but my hair hurts."  More and more, I
feel the same way.  I don't think I have a pain free moment, day or night.  At 66, I
think, "this is very discouraging!"

About 25 years ago, as an operating room nurse, I slipped on hydraulic fluid that
leaked from an orthopedic table and, three months later, I underwent a two level,
bilater laminectomy and fusion with a bone graft from my right hip.  It took a
whole year for that to fuse and, during that time, I wore a fiberglass body jacket
with a leg brace on the left, to keep me from extending my left leg and disrupting
the fusion.  That, of course, caused major changes in my range of motion on the
left side.

Since that surgery, I have continued to suffer from back pain and tingling and
numbness in my left leg.  I could no longer work in the operating room or inpatient
psychiatry but I was very fortunate to become a forensic nurse and spent 21 years
in that field.

In January of 2008, on my way to work in the midst of one of our city's worst
storms, just two blocks from my office, a tree broke in half and toppled on top
of my van, with me inside.  The van, which I had just paid off, was totaled.
I spent a few hours at the ER and was discharged.  X-rays taken at the time
revealed I had cervical spinal stenosis!  I had also  been diagnosed with lumbar
spinal stenosis the year before when I saw my orthpodedist with ongoing back
pain that seemed different from my usual back complaints. 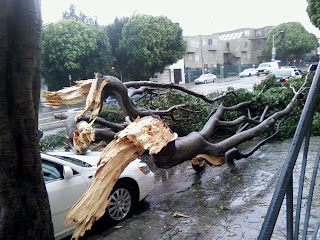 The tree had covered both lanes of Potrero, a divided street
and was on top of my car!
'For over a year now, I have been having bilateral shoulder pain and left knee pain.  I
had an MRI done which showed a left rotator cuff tear but, recently, when I saw my
orthopedist and had x-rays of both shoulders and knees, my doctor said I had "severe"
arthritis in all four joints and he recommended joint replacements.  I have a gastric
ulcer so treatment with NSAIDS is contraindicated.  I do take other medications -
non narcotic Tramadol - for pain and, occasionally, Vicodin, but nothing really
seems to help.  Sleep is sporadic and, every time I move or turn, I hurt so much.
I wake myself up with my moans ( good thing I have no romance in my life, huh? ).
I even have arthritis in my thumbs so typing on the computer isn't easy!  I'm going
to get that Dragon voice recognition software.  My girlfriend uses it and it has made
her life so much easier.  With it, I can do my blog while lying down in bed and
won't have to spend so much time sitting up at the computer!!

My doctor has given me medication for sleep but I rarely use it.  I know I should
since I rarely sleep more than four hours a night.  Maybe a couple of times a week,
I'll try it to see if it will allow me to sleep longer, pain free.

Something MUST increase my quality of life if I'm going to be hanging around
longer!  I can live with chronic pain to some extent - I have for years - but this is
no fun.  I think it's time for a referral to a pain clinic.