I am so sorry, my dear followers and friends for being remiss in replying to
comments and keeping up to date on your wonderful blogs.  I've been trying to be a
little better at following doctor's orders not to sit more than five hours a day at the
computer, in hopes of reducing my chronic edema to my feet and ankles.  I try
to lie in bed and use my laptop but I find it so difficult to focus that way and,
inevitably, I am back at my desk after about thirty minutes in a recumbent position.

Also, I took some time ( three wonderful days ) to go up to West Sacramento for a
visit with my middle son, Alex, his lovely wife, Laura, and my two granddogs. I
hadn't seen them since Christmas and. with their bizarre work schedules, it's almost
impossible for them to get down here.  Laura is a paramedic who puts in sixty hours
a week and Alex, in addition to going to school, works about 30 hours on a 4AM to
noon shift in the dairy department at a Safeway, twenty miles from his home.

Wednesday evenng, while Alex was at class, Laura and I met her mom, Christine,
at Sacramento's, Taco the Town, for drinks and appetizers.  We had such fun,
feasting on fried foods.   The owner of the restaurant also owns the Middle Eastern
spot next door and you can order from both menus so we selected two dishes from
each.  Christine and I tried really good dark rum drinks made with muddled lemons
and oranges and sugar which I duplicated the next day at their house.  I added limes
and blood oranges to the mix and used Mt. Gay rum and thought mine were even
better! 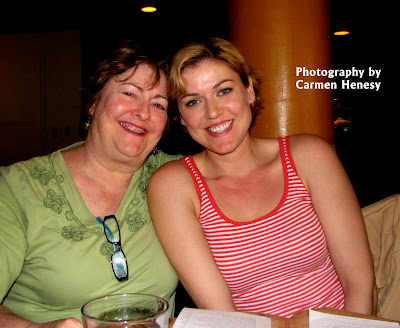 ﻿My daughter-in-law, Laura, with her mother, Christine ( who is also an R.N. ) 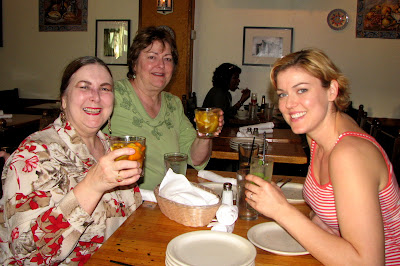 ﻿The three of us with our drinks - Laura is having a mojito - you can see my
scar, on the side of my nose, from the skin cancer surgery.  It's been
two weeks since I had it removed. 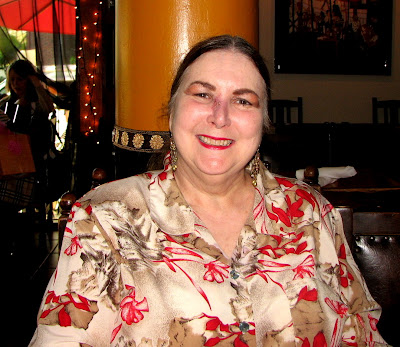 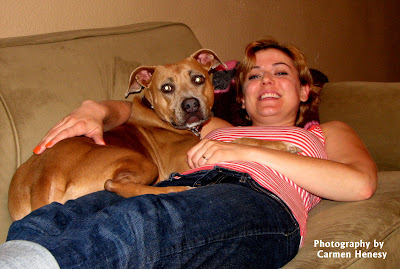 Here's Laura, lounging with Taffy, my first granddog, who is a real
snuggler and slept with me while I was there.
I can't believe Alex even got me out two days, for a walk in his neighborhood with
the dogs.  First of all, it was HOT!  The temperature was up to eighty degrees ( 26 C ).
I really felt sad with the news that the northeast was suffering from yet another snow
storm - especially since the fruit trees in my son's neighborhood were in full bloom as
were many Spring flowers.  Several weeks of rain had left the Sacramento River at
almost flood stage.  The Yolo Causeway, crossing into Sacramento, which is usually
planted with rice part of the year, looked like a huge lake, with trees showing only the
tips of branches above water, no trunks at all visible! 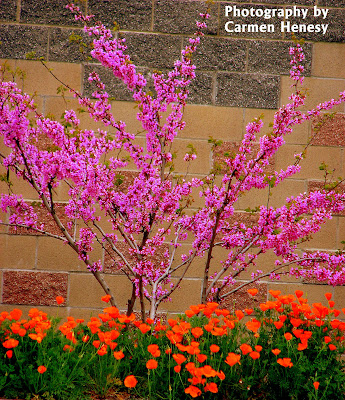 ﻿A long stretch of Jefferson was blooming with these! 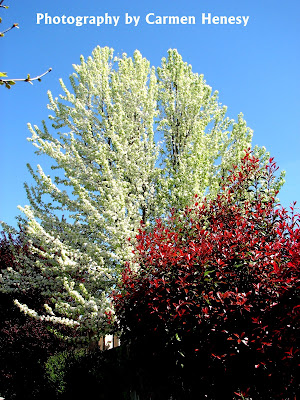 ﻿We passed these our neighborhood walk. 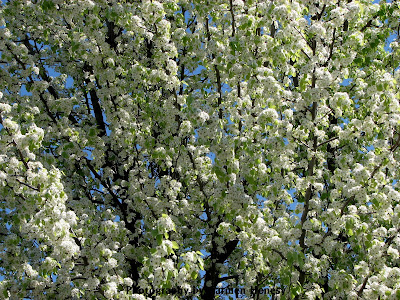 This is the closest thing to snow I saw during my visit although Laura went
skiing at Lake Tahoe, in the Sierras, on Thursday, two hours north of
Sacramento. 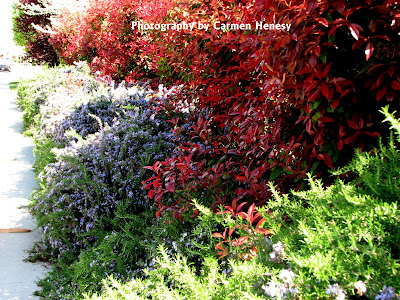 ﻿Shrubs we passed.  The rosemary was so beautiful.  I took a few
sprigs to use for cooking the next day! 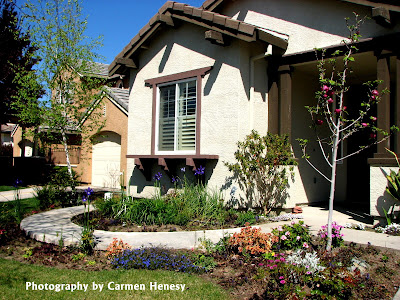 This house is a few blocks from Alex and Laura.  They live in a
new subdivision, close to the Sacramento River, not too far from
the state capitol. 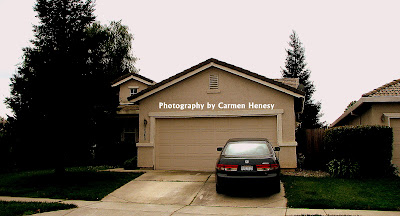 Alex and Laura's first home.  They moved in a year before their
wedding and immediately went to Yolo County shelter to get their
first dog, Taffy.  Two months later, they went back for Bucky. 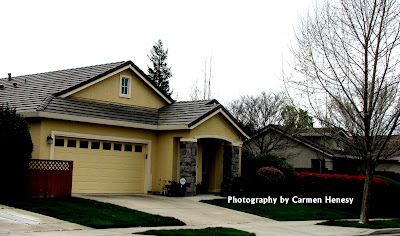 Another home in this West Sacramento neighborhood.  In this recession,
houses here have become much more reasonable, listing for about
$200,000 for a one story house, less than ten-years-old, averaging
1700 square feet. 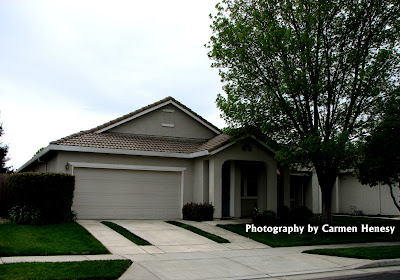 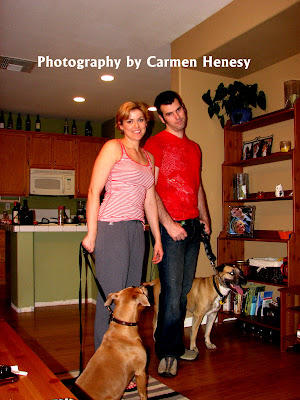 As you can tell, Alex does not especially enjoy being
photographed!  Here the dogs wait patiently to be
taken out for a walk.
Of all my sons, I have seen Alex the least.  He moved away after high school,
initially to attend UC Davis, eighty miles away, and he's not been back since except
for brief visits.  Davis and the Sacramento area have been his home ever since.  I
really should go up more often since, when I do, I realize how much I really do miss
him!  It's almost exactly a hundred miles from my door to his and, at sixty-six, I know
I don't have that many more years left where I will be able to easily drive back and
forth.  I've made a resolution to go up at least every other month!  He's the only one,
thus far, who has married - and what a great choice he made in his terrific wife, Laura.
I so enjoy her and her entire family.  Now, if only Shawn ( I think I might as well give
up on him ) and Jeremy would find an equally lovely woman to share their life, I
could rest easy ( easier )!
I'll catch up on everyone's blogs this week and work on responding to all your much
appreciated comments!  ﻿
Posted by RNSANE at 4/04/2011 01:25:00 AM