During my recent visit to my son, Alex, and my beautiful daughter-in-law, Laura,
I didn't take too many pictures of the granddogs since they never seem to change.
I hadn't seen them in three months so I was afraid they wouldn't know me.  I
shouldn't have worried.  They greeted me with so much joy and it really did my
heart good.  I really love those dogs and, at night, they often sleep in my room -
if Laura and Alex close their bedroom door.  Taffy, the smaller one, jumps on the
bed with me ( she is a snuggler ) but Bucky likes his pillow on the floor at the side
of the bed. 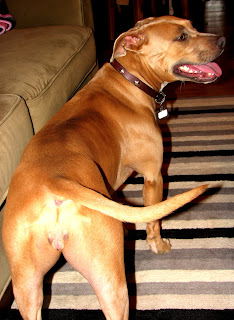 Taffy has been with my son two months longer than Bucky - for nearly two years
now.  She's mostly pit bull - I never thought I would like them - very sweet and
gentle and quite shy and timid.  I think she must have been badly treated wherever
she was first. 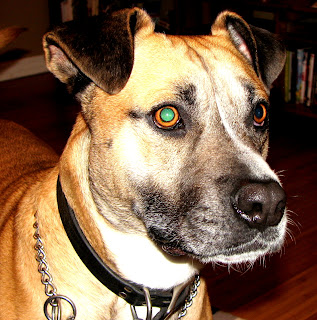 Bucky is part pit bull and something else, perhaps shepherd.  He seems so much
bigger than Taffy but Alex says, at 75 pounds, he's only 10 pounds more.  He is
much more rambunctious ( not mean at all ) but he loves to rough house and wrestle
with rings and play with toys.  If let loose outside, ie, in the woods, he'll take off
and come back when he's good and ready, which is a bit of a concern to the kids.
Taffy doesn't want to stray far from them. 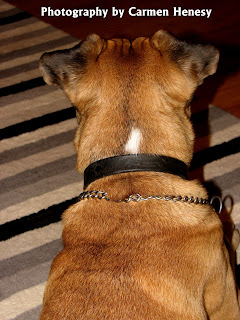 I like this little white spot on Bucky's neck.  I think it's where his guardian angel
tried to grab him when he was gallavanting off and wouldn't come back when
called. 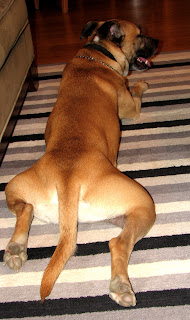 I think it is so funny how Bucky lies down like this with his legs stretched out behind
him.  He can sleep like this for hours.

I am participating Camera Critters, a wonderful meme to show off your pet photos and
and others you have of creatures that you have taken.  Check it out and join in the fun.﻿
Posted by RNSANE at 4/09/2011 02:32:00 PM