It is well after midnight and here I sit at my computer in Daly City, California, thinking
longingly of this date, for the past two years, when I was snuggling in my bed at the
Hotel Napoleon in Rome, Italy.  I will have to get off an email shortly to Roberto Cioce,
the general manager so he doesn't forget me.  He and his staff made my stays there
truly memorable and the most delightful hotel visits of my life.
My birthday flowers from Roberto Cioce of the Hotel Napoleon, Rome, Oct 3, 2008
My 40th birthday, I was in Paris, France.  That wasn't the best trip of my life but I won't
go into those details here.  Suffice it to say, I would have been much better off if I had
made that trip alone instead of with the traveling companion I had.  It was a most
unpleasant week as we visited Paris, then made our way down the Atlantic coast,
across southern France, and back up through the western part of France to Paris again.
For my 55th birthday, I was on a Mediterranean cruise with my beloved friend, Brenda
Garison, and saw Venice for the first time..  We dined with the charming Captain
Ronson the night before I turned 55 and he invited us to the bridge to sail down
the Grand Canal into Venice the following morning. What a special birthday gift that
was!  A few days later, we were on the magical Greek island of Santorini where I
rode this poor donkey up the steep cliff for a wonderul meal and views of a sparkling
blue sea below us. 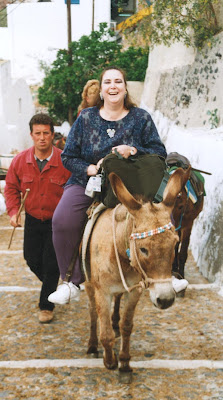 Climbing up the hillside in Santorini, Greece
My friend, Sherry Arndt and I did a cruise from Ensenada, Mexico to Honolulu, Hawaii
in mid September 2007 so I was able to celebrate a very special aloha birthday with
Warren Fukushima, my friend of almost forty-six years. 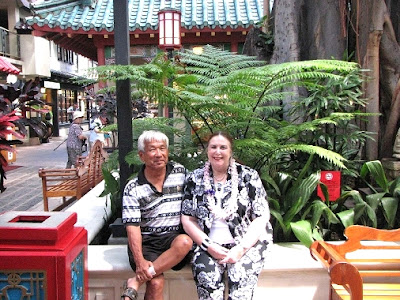 At the Hilton Hawaiian Village in Honolulu with Warren Fukushima
Last year, four friends ( two from California, one from Texas and one from Florida ) went
with me to celebrate my birthday in Rome and to do a six day Mediterranean cruise with
an overnight stop at the end in Malaga, Spain and four nights in Barcelona before flying
home.  Since that time, I've pretty much stayed close to Daly City. 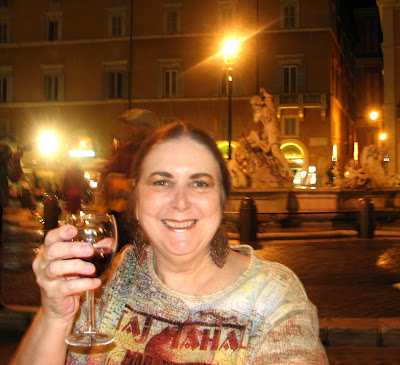 Cheers from the Piazza Navonna in Rome
So, no travels for me this year - but I did get a trip to New Orleans for my 45th nursing﻿
school reunion which will take place October 15 - 17.  I'll stay for five days which will
give me a little time to visit with classmates who live in the area and to eat some
wonderful Creole cuisine.  That's one terrific birthday present.  Also, this morning,
my youngest son, Jeremy, and his lovely, Katie, took me to Verizon and gave me
a new Droid 2 for my birthday.  I have been playing with it all day and, maybe, just
maybe, by the time my next birthday rolls around, I may have mastered all the exciting
and fun things this new phone can do. 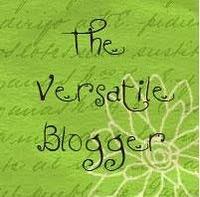 I want to thank Ann of Retired and Crazy, a lovely woman, across the "pond" in England
for giving me this Versatile Blogger Award.  Ann's husband, Davy, died earlier this year
after a long illness but she continued to write and endeared all of us to her with her wit,
stoicism and stamina against the "system" while continuing to care for the man she loved
in the last days of his life.
I'm to tell you eight things about me that are not generally known which may be a bit hard
since I did this for another post earlier this year.  I looked for it but, thus far, haven't located
it so, forgive me, if there is repitition.
1 - My brother was born in Salzburg, Austria.  We lived there from the time I was three,
until I was six-years-old.  My dad was an Army Infantry Lt. after the war.
2 -  I was named after Carmen Miranda.  My mother loved that Portuguese-born
Brazilian singer, dancer, and Hollywood film star popular in the 1940s and 1950s.
3 -  In my high school's powder puff football game, my senior year, I played left tackle.  I
was tall and skinny and my nickname was "lanky."
4 -  I don't like sea urchin.  I've tried eating it several times but it still doesn't appeal to me.
5 - I just discovered the t.v. series, "Dexter" and I am an addict.  We don't get Showtime
but I stayed up two nights in a row for twelve hours watching the first two seasons
"live"  on Netflix, then ordered the next two seasons on disk.  I am almost tempted
to get Showtime so I can watch season 5!  If you live near me and get Showtime,
can I come over to your house and watch it with you?
6 - I love raw oysters.  I can finish off several dozen by myself, with a sauce of catsup,
lemon juice and horseradish.  I am so hoping that the oysters weren't damaged
by the leaking BP oil so that I can enjoy them during my visit to New Orleans.
7. - I am not a good swimmer.  As much as I like cruising, I prefer swimming in a pool
to ocean swimming, because I don't swim well against waves, current, etc.  Also,
I don't  like creepy, crawly things around my legs and body.
8 -  I have never had a moving violation for speeding, running a red light or anything
of that kind.
My next challenge is to pass this award on to 8 other worthy bloggers. I do realize
that, very often, people do not wish to participate in this type of activity so please
speak up.  After much thought I have selected the following:
1- http://redpinemountain.com/
2 - http://steveroni.blogspot.com/
3 - http://www.siromade08.com/
4 - http://fickleinpink.blogspot.com/
5 - http://woonietest.blogspot.com/
6 - http://smile-windie.blogspot.com/
7 - http://www.cultofdeception.blogspot.com/
8 - http://goaskkatie.blogspot.com/
It may take me a day or two to get all the comments tallied and to have the drawing for
my blogaversary giveaway.  I want to thank everyone for participating!  I will contact you
with the winner's name as I will need a mailing address.
Posted by RNSANE at 10/03/2010 05:19:00 AM