Much to my relief, while fighting the miseries of the worst cold ever for almost a week
prior to leaving, I finally managed to board the Alaska Airlines flight to Seattle, and
continued on Emirates Airlines to Dubai - where I overnighted- and on to Mumbai
the next day.

Is it that baby germs are super virile?  Harper shared her sniffles and cough
with Nana and, while she continued to function pretty normally, I managed baby
sitting, fixing an occasional meal but little else.  I'd put a few things in a suitcase and
have to lie down for an hour, slept fitfully, minimally at night, and the night before
takeoff, was woefully unready to go.  After planning to nap for only a half hour
about 3AM, I woke at 5AM, in a panic.  Throwing things helter skelter into a third
suitcase ( I was already taking a box of gifts, etc ), in addition to Emirate's very
generous complimentary two checked bag allowance, I rushed out the door,
leaving my room looking like the aftermath of an earthquake, tornado, and Filene's
bargain basement sale ( is there still a Filene's in Boston ), all rolled into one.

Alex, my son, had kindly requested the day off from work and, along with sweet
Harper, drove me to the airport ( he really is a kind fellow ) and, since I could not
find my suitcase keys, my bags departed unlocked.  The Sacramento Alaska
agent told me that I could NOT check my bags all the way to Mumbai though I
had spoken to Emirates staff who assured me I would not have to pick them up
for my overnight in Dubai and that they could be check all the way to India.
After parting with $350 for the extra bags and being told by Alaska Airlines that
I might, indeed, might have to pay it again in Dubai, I headed, mournfully, to my
gate.

For some reason, I was upgraded to first class and a bloody mary and decent
breakfast helped a bit to ease my miseries.  With four hours connecting time in
Seattle, I arrived quite early at the Emirates gate, excited to fly on this highly
acclaimed airline for the first time.

The young woman, who took my ticket, looked askance, and asked why my bags
had not been checked on to Mumbai.  "Good questions," I responded, going
through the saga of the baggage experience.  She quickly went about trying to
change that, calling her supervisor, having my bags pulled  in all of that luggage
( good thing I was there early ) - complimenting me on attaching tags with my
photograph on them - taking my picture which was required and submitting a
wire and a request to Alaska Airlines.  It was after I had already boarded the
Dubai flight that my name was called and a flight attendant brought me my new
luggage tags, indicated Mumbai as the final destination for my suitcases!

Surprisingly, the flight to Dubai was only half full and my seat had been changed
to a bulkhead nearer the front.  Normally, I am not a bulkhead fan as the two out
seats have immovable arm rests and your carry on can't be stored underneath.
However, the lovely flight attendant told me the whole row was empty and that
armrest went up so I could stretch out on two seats and, if I was a bit flexible, I
could put my legs over a third seat and "catch a snooze."  Snooze I did, in between
cocktails and two very delicious meals.

Emirates crew were just wonderful and it has surpassed my former favorite, Singapore
Airlines, and second ranking, Cathay Pacific, in my estimation in terms of service
and friendliness.  Their crew are definitely multinational, with charming Italian ( Florence ),
Pietro, asking me if I had a dead body in my carry on when he hoisted it overhead.
He was such fun the whole flight - until he came by and brought me a four page
evaluation to fill out about the airline - which I did quite willingly.  It is exceptional and
I especially liked the ladies in their uniforms with the red pillbox hats, white veils and
their bright red lipstick. 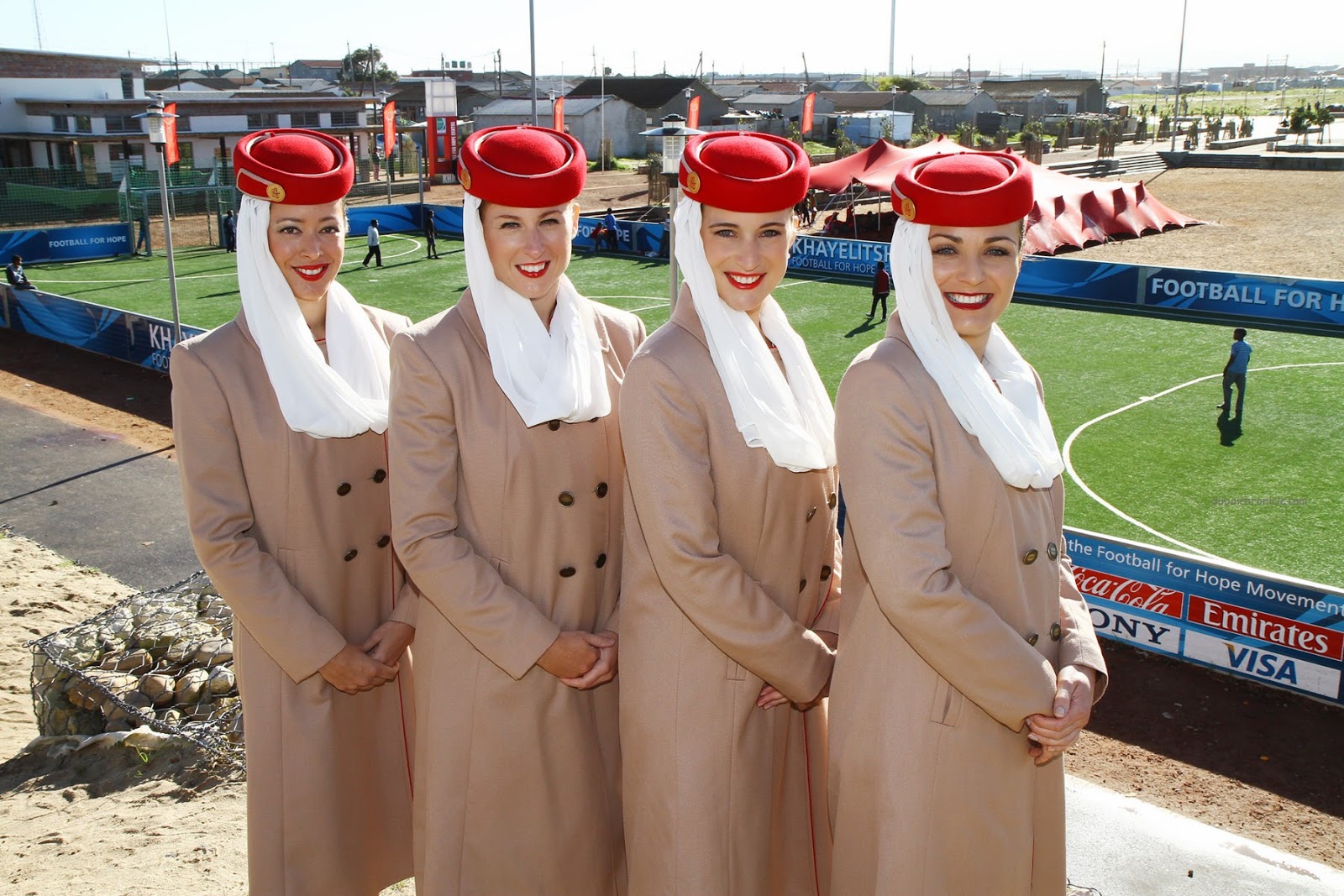 On arrival in Dubai ( our flight had an overnight stopover, with our Mumbai
departure at 1PM the following day ), I was amazed at how quickly we went through
immigration in their amazingly glistening, clean airport.  Even more surprising was
that I did not fill out any kind of immigration form, either on the airline or prior to
departing the airport.  I stopped at a hotel desk and they arranged a room for me
for the night and, despite my wanting to go out and see the bright lights of Dubai,
for my first time visit, I opted for bed.  I hope I fly back to San Francisco on Emirates
because I was told that holders of a U. S. passport may have a 30 day temporary
visa for stays in Dubai and I would really like a chance to see it ( maybe not in the
sweltering heat of summer ).

The following day, with equally great ease, I was back on my flight to India.  Every
seat, however, was full ( Dubai is a place of employment for a great number of
India citizens ).

We were about halfway to Mumbai, having just been served lunch, when the flight
attendants scurried about the aisles, removing the barely touched trays.  An
announcement came over the intercom, "Sorry to disturb lunch service but we are
having to return to Dubai for security reasons."  On the video screen, the plane's
route showed a U-turn and going in the opposite direction.  Within minutes, the
plane reversed direction and, again, was headed for Mumbai. My seat mate had
asked the flight attendant for a double Jim Beam which I had quickly dittoed but
lunch did not return to our tray toubles.  We never did know the nature of the
"security issue" and landed about thirty minutes late in Mumbai.

I checked into the Ibis Mumbai Airport Hotel with a warm welcome from staff and
even a nest of towel  cygnets and mama swan on my bed ( Sudhir, my "cabin
steward" had once worked with P and O cruise line! ).

Saturday, I went to Vodafone to replace my non functioning sim card and feasted
on baingan bharta which Chef Yatin of the Ibis Spice It Restaurant made me a
fan.

Home again in India and life feels superb in between a few remaining sniffles and
sneezes!