I am still encumbered by this horrible summer cold, so much so that I even went
to Target the other night and bought two boxes of "day and night" cold capsules.
I've been taking them religiously and, perhaps, they are helping a bit.  My coughing
has decreased and my runny nose is not at a dripping faucet level but merely a
constant slight leak.

I managed dinner last night at Kru, one of the most wonderful Japanese retsaurants
I've ever tried - we feasted on beautiful and delicious presentations of sashimi
which I washed down with Tokyo Black, a Japanese beer that tastes like Guinness,
one of the only two beers I like ( the other is Newcastle Brown Ale - now this can be
added to my beer favorites ) and, yesterday, I made a banana cream pie.
My boys love banana pudding but, since I have a graham cracker crust and an
abundance of bananas, I chose to do a pie.  It was absolutely scrumptious.

I slightly altered the recipes from allrecipes.com, based on some review
recommendations.  I did  not put whipped cream on top but made a meringue
from the three egg whites.

Here is my altered recipe and you can review the original recipe and over
eight hundred reviews at: 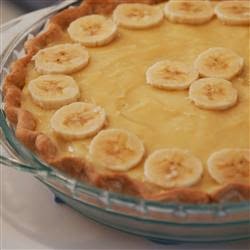 otiginal recipe by Ruby Pfeffer who states:
"Banana cream pie is one of the yummiest things on earth and this is a great one"

In a saucepan, combine the sugar, flour, cornstarch and salt.  Add milk in gradually,
while stirring gently.  Cook over medium heat, stirring constantly until the mixture is
bubbly.  Keep stirring and cook for about 2 more minutes, then remove from burner.

Stir in a small quantity of the hot mixture into the beaten egg yolks and immediately
add yolk mixture to the rest of the hot mixture.  Cook for 2 more minutes - remember
to stir keep stirring.  Remove the mixture from the stove, and add butter and vanilla.
Stir until the whole thing has a smooth consistency.

Slice bananas into cooled pastry shell.  Top with the pudding mixture.  Fix and
top with the meringue.  Bake in a 350 degree oven for about seven minutes or
until the top is browned to your liking.  Remove from oven and cool, then refrigerate
for about 2 -3 hours before serving.

This really is a terrific pie.  I love allrecipes.com and have used the site for years.
You can register and save recipes to your online recipe box.  For this particular
recipe there were about 800 reviews and I modified this recipe from their suggestions.
I chose to make meringue rather than use whipped cream because I put meringue
on my banana pudding.

I made the pie yesterday and it is almost gone, less than 24 hours later, with only three
of us here ( plus Harper ).  Well, you know what they say...."feed a cold"