Last December, when I arrived home from India, it seemed eternities before I
would return again.  I had plenty to do in the meantime - catch up with friends,
have my total  shoulder replacement surgery, drink good California wine which
I had sorely missed in India ( relishing decent vintages, some priced at under
$10/bottle ), eating at my favorite restaurants, seeing all my physicians and
getting medical clearance to return, once again, to "the country of my heart".

I even tried to move out of the large storage space I'd been renting since October
2011 - at almost $400/month - into a smaller space, to no avail.  For my Mother's
Day gift, Shawn ( my oldest ) and Jeremy ( my youngest ) spent the entire
weekend helping me go through things but we barely made a dent in the pile
of boxes.  Nonetheless, I sent over ten bags of clothes to Goodwill, all clothes
I am now too slim to wear, plus many other thing, that I initially thought I couldn't
without.  Furniture, that failed to be snapped up by Craig's List buyers, was
broken apart and taken to the dump.  Perhaps, if I hadn't been sidelined for
three months with my shoulder surgery, I might have been able to accomplish
more.  At any rate, though, I felt quite righteous in eliminating as much as I did..
and I really appreciated the gift of time from my boys.  It was nice hanging out
with them as well.

Yesterday, I drove up to West Sacramento for my final visit with Laura, Alex,
baby Harper Ann, and Taffy and Bucky.  I am really going to miss seeing them
and watching my granddaughter's first six months of life.  Though he has not
done it yet, Alex has promised to download Skype so I can keep up with them
that way.

Harper Ann is now a month old.  She has gained three pounds already and she
is a charmer.  I get such a kick out of the two dogs who are aware  of her every gurgle
and, heavens, if she actually cries, they go racing to the crib, then back to Laura and
Alex if they think there is not a fast enough response. 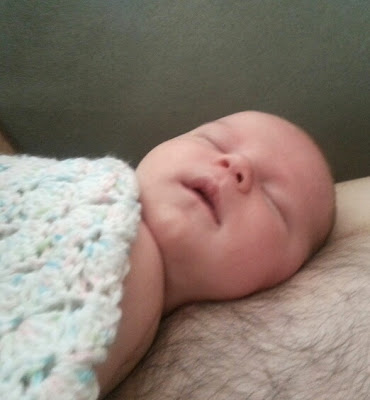 Harper Ann still spends most of her time sleeping 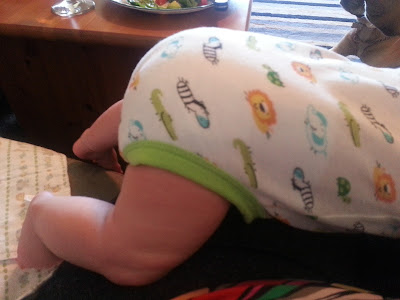 At 11 lbs, 3 lbs over her birth weight, she's outgrown her newborn clothes! 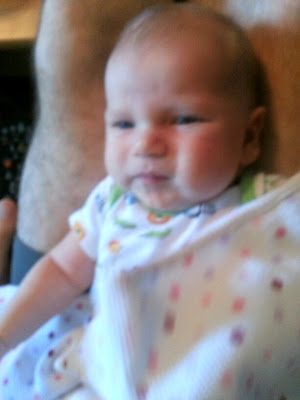 A bit disgruntled and wanting food! 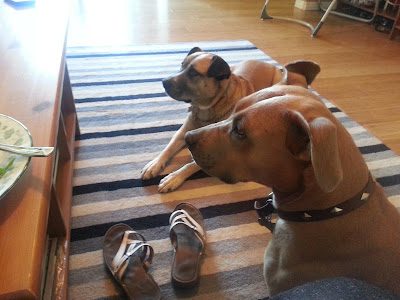 I will be home again the first week in December.  One of my baby gifts was a
Christmas stocking for Harper Ann and I'll be working on that while I'm in India.
I've made stockings for all my sons and Laura but this one will be a special
labor of love.

I know I'll have a hard time saying goodbye when I leave West Sacramento this
time.  I've never been gone any length of time with a sweet granddaughter
seven thousand miles away.