This past week, I haven't accomplished very much in my quest to pack,
get out of this house and head to India - but I have had a lot of fun.  On
Thursday, my dear friend, forensic toxicologist, Werner Bernhard, arrived
from the Bern, Switzerland area to attend a huge conference at the
Marriott Marquis in San Francisco ( over 1200 of these scientists were
here to discuss their specialty and share information ).  Werner stayed at
my house two nights before going to the Marriott, then came back for
three nights after it was over.

Saturday, he went with me to the wedding of a very dear friend of my
son, Jeremy, ( he was best man ). It was a beautiful event, held at sunset at
the Cliff House in San Francisco.  It was a fun occasion!  The food was
really good ( the Cliff House is a restaurant ) - I had salmon - and the
DJ played a great selection of songs which included many from the
60's and 70's.  Even Werner and I danced!

Sunday, there was a special party that I got to attend with Werner and
my good friend, Joanne Olivieri.  We were there for nine hours...so no
packing that day, just time with dear friends, more great food, much
laughter, good music, lots of food and drink.

Monday was my 67th birthday.  The whole day was nice and we ended
it with dinner at Manivanh Thai, a restaurant owned my my Lao family.
It's over by San Francisco General and I know I've eaten there at least
1000 times over the years ( probably more ).  Two of my three sons were
there and it was really a wonderful evening.

Yesterday, Werner and I went out for Chinese food and, as I've done the
past three times he's visited from Switzerland, I took him out to shop
for underwear!  I guess it costs so much more in Switzerland and, since
he has three sons over 18, he says it tends to disapper from his drawer
all too frequently.  We made a Costco run just before we headed to the
airport.

I really felt sad saying goodbye to him and was really glad we got to have
this visit together.  It was a shame his wife, Fabienne, couldn't have come
along but someone has to stay home to look after the pets, I guess.  I
would love to return to Switzerland again someday.

Now, I'd better make haste while the sun shines!  Whoops, the sun has
deserted us! 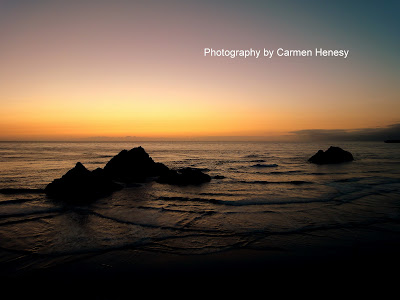 The scene on the balcony as the wedding began! 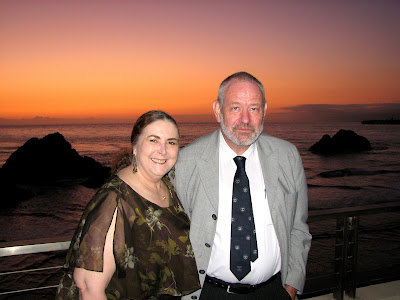 Werner Bernhard and me 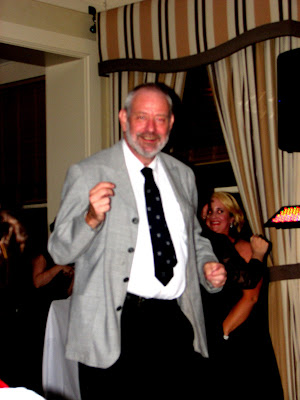 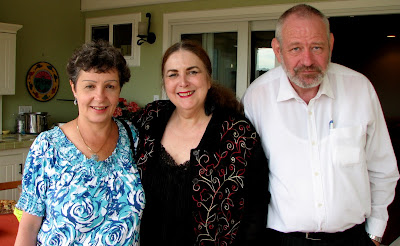