Yesterday evening, my good friend, Ajay Singh Shekhawat, the front desk
manager at my favorite Jaipur heritage hotel, the Umaid Mahal, honored
me by inviting me to his home.  Bhawanipura Village is about a two hour
drive from Jaipur, depending on traffic, and it is, indeed, in the country.
The air is clean and fresh, there is no pollution, and it was a lovely escape
from the big city.  I had a wonderful time.


Our traveling foursome consisted of myself, Manoj, a taxi driver frequently
used by the Umaid Mahal Hotel and Manoj, an architect friend of Ajay's.
I think I amused them with my nonstop comments and frequent
admonitions to motorcyclists who were not wearing helmets and my own
dismay at the lack of seatbelts in the back where I was seating.  I was told
we were heading out of the city so they weren't necessary.  I gave them a
forensic nurse piece of my mind!

We passed through wide open spaces, with lovely trees, and cultivated
farm lands.  Shortly before arriving at Ajay's home, we stopped so he
could speak to some friends.  I took the opportunity to get some
photographs.  One was of the gentleman below who did not, at all,
object to having his face photographed.  Ajay translated for me since he
only spoke Hindi and explained I was going to post it on my blog.

By the time we got near Ajay's house, it was after 6PM.  After all my days
of trying to photograph a peacock, as we passed the empty house where
he was born, we saw a peacock on top.  He says it has now been taken
over by peacocks and he, jokingly, called it "The Peacock House".  I was
glad to get this single shot.  I could hear more calling out - they have a
really sad cry - as night darkened.

At Ajay's home, we were warmly greeted by all the family.  Of course, the elders
spoke Hindi and I could not understand them - but there was no mistaking the
warm smiles and feeling of welcome.  The children, initially shy, spoke some
English and curiosity soon got the better of them and they gathered around to see
the strange American woman!

Ucchavkanwar, Ajay's mother, set about preparing chai but first milked the goat.
This was a first for me...REALLY fresh milk for my chai and it was delicious. 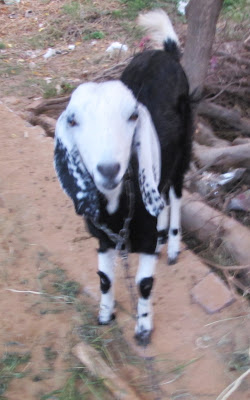 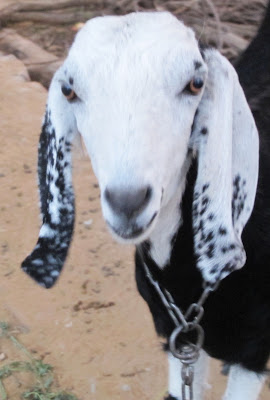 I thought this little goat was so cute.  I felt sad, though, because he was chained
just far enough away that he couldn't touch his mother.  Poor fellow. 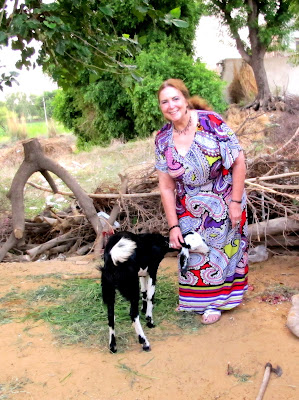 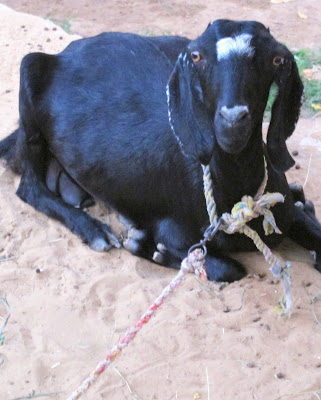 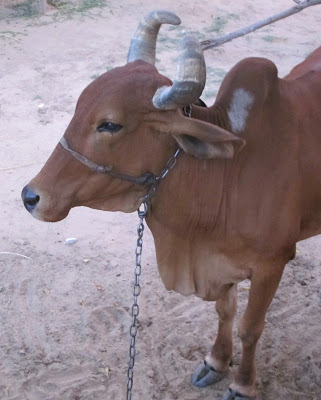 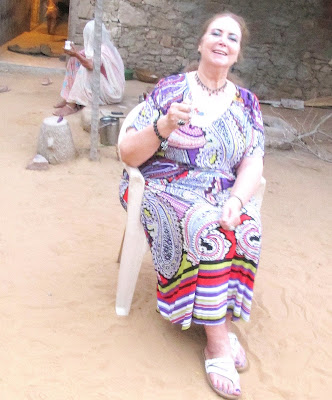 That cup of chai with the fresh goat's milk was just delicious. 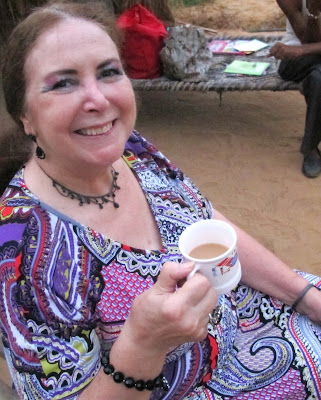 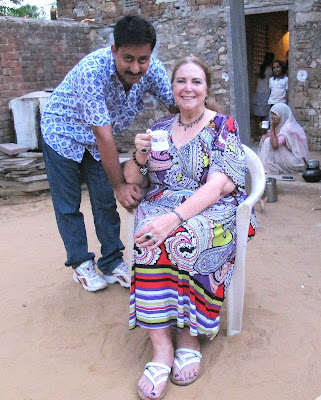 Here I am with Ajay - it's our first picture together.  I'd never seen him in casual
clothes before, only in his Umaid Mahal Hotel front desk manager attire.  He has
been an extraordinary friend to me in Jaipur, always looking out for me and coming
to my rescue whenever needed.  I have him to thank for my new ground floor air
conditioned lodging, among other things.  I hope he knows how much I appreciate
his friendship - and not for just those reasons.  He has such a good heart. 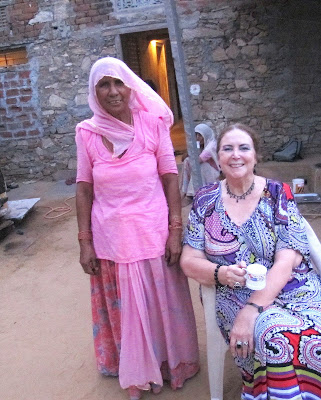 This is Ajay's mother, Ucchavkanwar.  Can you imagine having to write
her name on a lot of forms?  I always felt a bit sorry for my boys,
Alexander and Jeremy Vukasinovic - and that's why I did NOT give them
middle names! 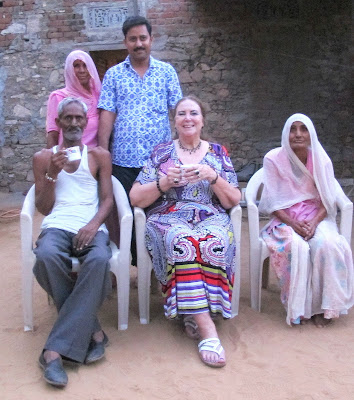 A family portrait....Ajay's mother, father, grandmother and, of course, I had
to get into the picture as well!!! 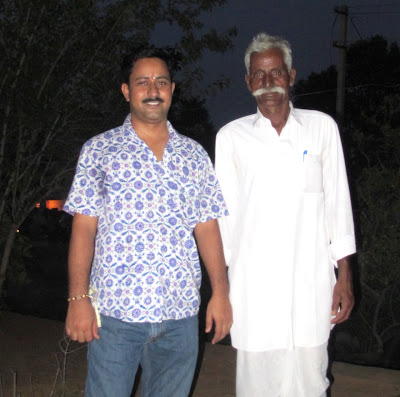 Ajay with his uncle.  I loved Ajay's shirt...with purple flowers.  I told him I like a
guy who will wear pink or purple, and flowers at that!!!  Reminds me of Hawaii!!

We went to Bhawanipura the day after Raksha Bandhan, or Rakhi Purnima which
is a festival celebrating the relationship mainly between brothers and sisters.  The
sister ties a rakhi ( sacred thread ) on her brother's wrist, symbolizing her love and
prayers for his well being and the brother's lifelong vow to protect her.  The brother
offers a gift to his sister, then they feed each other sweets.  You can read more
about this festival at: http://en.wikipedia.org/wiki/Raksha_Bandhan.  Since Ajay
wasn't home for Rakhi, his sister, Saroj performed the ritual while we were
there.  Unfortunately, for some reason, my flash chose to stop working during that
time so I have no pictures of the ceremony! 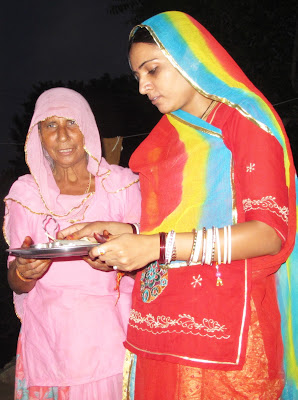 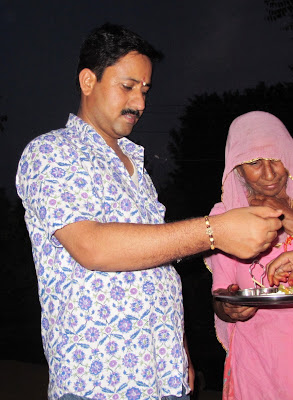 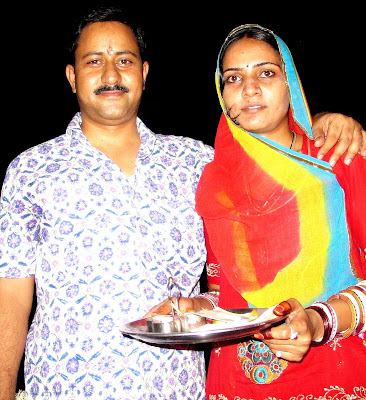 Ajay and Saroj.  Their mother must be so proud of them.  They look like
Bollywood movie stars! 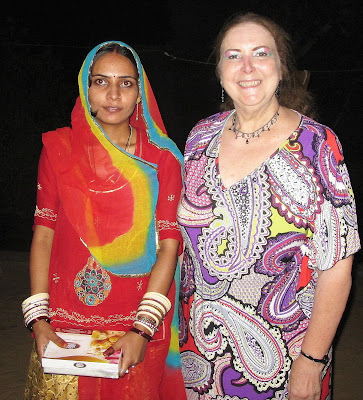 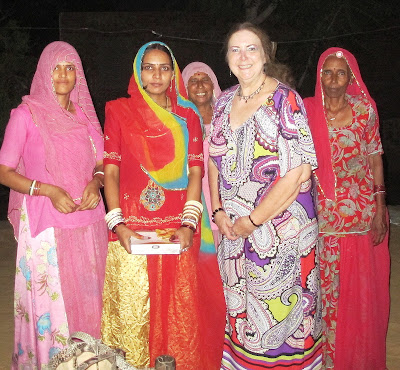 Aren't we a colorful bunch?  Thus far, I haven't purchased a sari.  They look so
complicated to wrap.  I gotten three kurtas and pants and I'd like to get a salwar
suit.  We'll have to see about the sari, though, when someone has time to give
me "in depth" lessons. 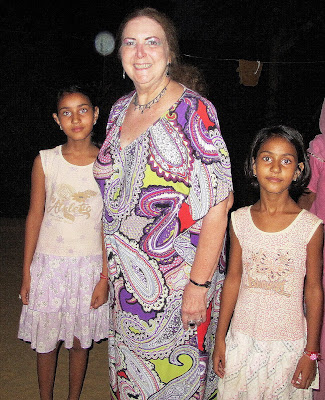 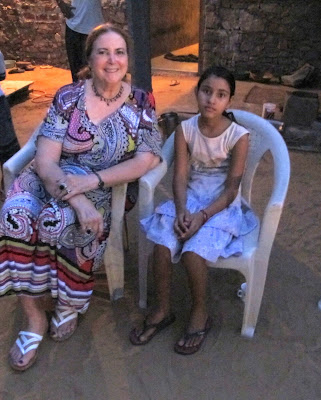 Here I am with Ajay's daughter.  She looks a bit wistful here...maybe
because I took her away from her homework.  Her dad lives at the Umaid
Mahal Hotel and only gets home for an overnight about every ten days.
With so many extended family members around, though, she is well
supervised, regardless.  Most Indian families are multigenerational. 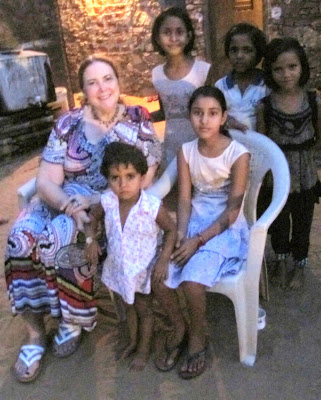 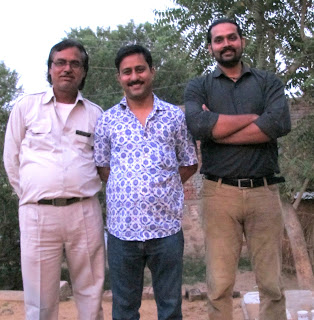 Here are my three traveling companions - our driver, Manoj, Ajay, and
Mahan, Ajay's friend, who is an architect in Jaipur.

It was a truly wonderful day and a delight to have been invited to go to
Bhawanipura to meet Ajay's family.  I loved being in the country.  I had
some other great pictures to post of another country visit - to Bhankrota
to see the family of Sunil Choudhury who was one of my floor mates
when I first moved to Jaipur.  Unfortunately, those photos may be lost
forever in my computer crash.  I hope Bharat Kshatriya may be able to
help resurrect them.  Now that I have a working internet, there is a whole
realm of possibility open to me!!!