Aside from a brief bit of melancholy which was quickly eliminated with phone
calls to my three sons, my Christmas in Mumbai was a very special time.
I was all caught up in the real sense of family felt everywhere.  Of course,
practically everyone in this village is either a Santos or a Pereira so it's all
about family.  And everyone was gracious enough to make me feel
included in it all.

For days, my "sister", Lorna, was making sweets from dawn to dusk - every
sort of confection, many familiar cookies and cakes, some I'd never had,
like guava candy.  I am a big fan of guava and quickly laid claim to that
entire tray of tidbits.  When we visited other houses, that's the first thing
for which I searched.

We went to Midnight Mass at Our Lady of Health Church in an
outdoor setting in the village.  It was a nice warm night, brilliant with
stars, and I let my mind wander as I sat beneath the palm fronds,
bedazzled by all the ladies in the most splendid bejeweled and colored
saris.

When the choir began to sing, I was totally in awe, not having expected
such vocal perfection.  Their rendition of "Mary, Did You Know?"
moved me to tears. 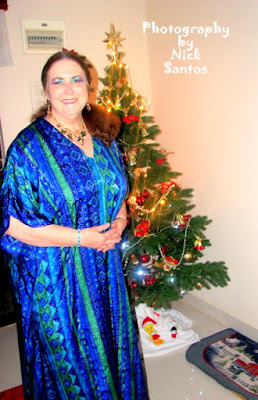 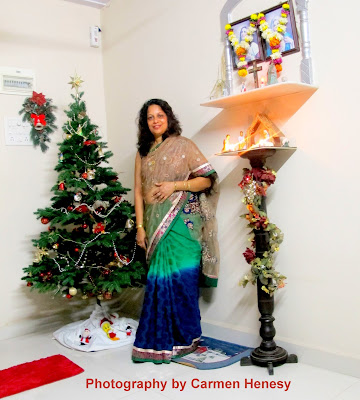 Beautiful Lorna Santos...I couldn't believe the length of this
sari fabric and the work it takes to get it wrapped so beautifully. 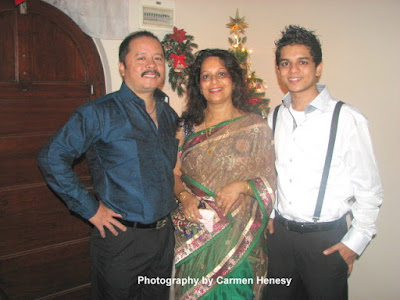 Ode and Lorna Santos and their son, Nick, who is about to celebrate
his 21st birthday.  Jake, the other son, was absent for our photography
session.  Santos is the first person I met and became friends with when
I began cruising with Royal Caribbean...he's the one who nurtured my
love of India and Indians!!! 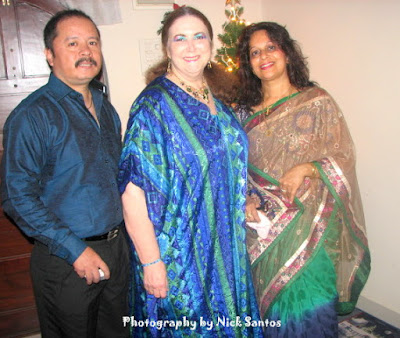 The church setting was packed and most of us were standing out by the
graveyard where you could still see the altar.  I had my walker with me so
I was able to sit....and I must admit, from time to time, my mind wandered.
I happened to be glancing down when I spotted a mouse scurrying a couple
of rows behind me, over the feet of the men standing there.  A couple of
men spotted it but none of the ladies did.  It ran back and forth for a little
while which really made me giggle.  I kept imagining the ruckus that would
ensue if even one lady had seen it - colorful saris flying, and screams
competing with the choir.  Fortunately, the mouse finally headed out into
the graveyard and disaster was averted.
At communion time, the priest came out toward where our crowd was
standing and I was surprised to see this tall, handsome young man who
looked like he should have been a Bollywood star instead of wearing a
priest's vestments.  During my church going days, all the priests I ever had
were ancient!
After Midnight Mass, we all went home where we made the rounds of
each other's houses, eating and drinking till the wee small hours of the
morning.  After a bit of a nap, the Christmas day round of visits began
again, with platefuls of sweets being exchanged among households
and another nap to ready ourselves for the evenings festivities.
Boy, do these Indians know how to party!!
Posted by RNSANE at 12/26/2011 07:51:00 AM