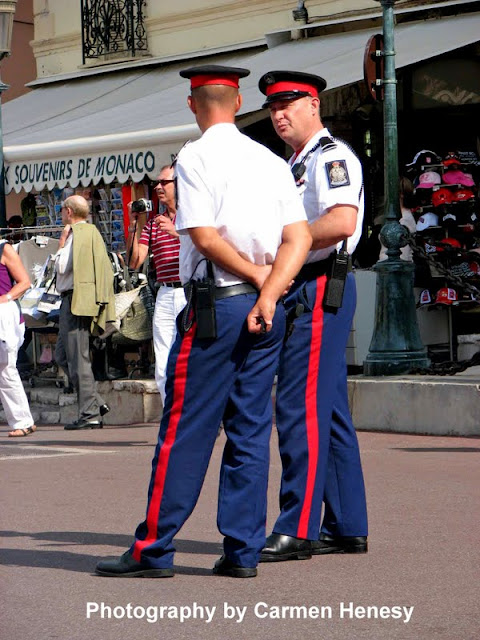 This was an exciting week in Monaco with the wedding of His Serene
Highness, Prince Albert to Charlene Wittstock of South Africa.  The
bride, elegant in every way, bore an uncanny resemblance to the
last Serene Highness of Monaco, Albert's mother, the former Grace
Kelly of Philadelphia who tragically died in a car accident in 1982.
The citizens of Monaco were very much a part of the two day wedding
celebration - the civil ceremony which took place this past Friday, July
1, 2011 in the palace throne room where Grace Kelly married Prince
Rainier in 1956 - and the religious ceremony which followed on July
2, 2011.  There were so many people in attendance that the religious
ceremony was held in the palace courtyard rather than in the cathedral
where Albert's parents were married.
I am not sure whether the Monaco police were dressed in more elegant
uniforms for the occasion but, when I was last at Monaco-ville, the old
fortified town which holds the palace, St. Nicholas Cathedral ( the
final resting place of Princess Grace ), and the Oceanographic Museum,
the police were wearing these blue pants with the red stripes.  That
was in October of 2009, for my 65th birthday!
I am participating in Ruby Tuesday - check out the site and add your
red post to join in the fun!