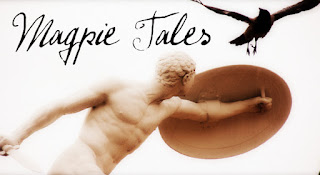 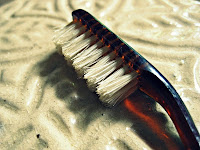 The Grout is Out - Magpie #20 - Tuesday, June 29, 2010
She wasn't very happy when Mrs. Howell had rung yesterday afternoon to tell her to open up the house  for the summer.  She would be relegated to the maid's quarters once again and she had gotten used to playing mistress of the manor in the opulent master bedroom, with its sweeping verhandah and views of the Atlantic.  She had even helped herself to Mrs. Howell's luxurious silk nightgowns and, on occasion, when Mr. Howell stopped off briefly "to check on things at the summer home" - something that his wife never did - Clarissa helped herself to Mr Howell.
Of course, they could never go into Charleston to dine at the elegant restaurants but he would have lobster, Louis Roederer Champagne Cristal Brut, fresh strawberries, pate, fresh asparagus, and other gourmet delicacies delivered from the gourmet shop sixty miles away.
For one or two days, she reveled in the good life, forgetting that she was merely a maid and had been so at Cypress  Cove for three years now.  She was seventy miles from town and well paid but she was almost finished with her online degree and wanted more for herself.  For the
next two months, Mrs. Howell and the children would be here and she would not be able to have any intimate contact with Mr. Howell.
Cypress Cove would be like Grand Central Station.   The full time cook would arrive, along with a nanny, the butler, and, probably, a tutor.  The gardener would be about more often and the pool boy.  She loathed being relegated to hired help status, especially when a small emerald pendant lay nestled at her throat and she had been given a modest but very elegant Movado watch.  She had enjoyed a luxurious week in Bermuda last month, another gift from Mr. Howell.
He had made it clear, at the beginning, that she could not expect any type of real relationship
from him, yet here she was, wishing for more.
As they lay in bed later that night, Clarissa turned to look at Mr. Howell.  He was dazzingly handsome with the moonlight on his bronzed face, his muscular body reflecting his obsession with his workout routine.  He didn't look forty-years-old, no, indeed.  He had married into Southern royalty ten years ago and was a major financial success himself.
For this reason, she didn't hesitate and plunged ahead, telling him she wanted to stop working at Cypress Cove.  "I want you to get me an apartment in Atlanta....somewhere you might be
able to come every week, even if it's just for a few hours.  I feel like I deserve that.  We've been carrying on like this for two years now and I've seen no one else.  I hate being ordered around by your wife.....sometimes I just feel like screaming that I'm sleeping with you!"
Clarissa felt Mr. Howell tense up beside her but he merely smiled and said, Perhaps we'll consider it.  Now let's get some sleep.  I have an early start tomorrow."
After breakfast in the morning, he reminded her, "The other help will be here on the weekend and my wife and the kids arrive Monday.  That gives you three days to get to work cleaning.  Remember, Mrs. Howell will be checking the bathrooms, especially.  Make sure the tiles are
sparklling.
He took her in his arms, kissed her, and was off.  No mention of an apartment, no talk of a future, just clean the damn bathrooms.  In a rage, she changed into shorts, tied her hair back and started in the downstairs bathroom.
Armed with cleaning supplies, she climbed into the fancy tub, with the worn toothbrush and began scrubbing furiously at the tiles.  "When I'm done", she thought, "there probably won't be any grout left"!  She was so engrossed with the task at hand, she never heard Mr. Howell enter the bathroom until the pillow was pressed against her face, cutting off the air to her lungs.
I am participating in Willow's creative writing Magpie Tales - join in the fun.
Posted by RNSANE at 6/28/2010 08:51:00 PM