In December of 2005, my friend, Sherry and I wanted to go to Tokyo. Our friend, fabulous jazz singer, Sony Holland ( check out www.sonyholland.com to hear some of her incredible songs ), was doing a three month gig at the New York Bar at the Park Hyatt in Tokyo and we wanted to go see her. We decided that we would consider it if the airfares hit $500 round trip from San Francisco and Minneapolis and, when that happened, we bought our tickets and then started working on hotels for a five night stay. Having heard that Tokyo accomodations are outrageously high, we were on the telephone and at the computers in our respective cities.

"Carmen," Sherry says to me, "Do you think this is a mistake? I'm on the Northwest site and I see a twin room at the Hilton in Shinjuku for $3.00 a night,"

"You've got to be a kidding! Of course, it's an error...but, if you've got your credit card out, get it FAST!" So she booked it and it came back confirmed.

By then, I'm on the site and I've scrolled down a bit. "Hey, Sherry. I see a queen room, on the concierge level, with full breakfast in the mornings and cocktails and hor d'oeuvres in the evening for $5.00 a night. I'm booking that for me." That also came back confirmed. Sherry then changed her reservation to the concierge level.

Figuring there was no way on God's green earth we would ever get these Hilton rooms at this rate, we left for Tokyo with a list of back up hotels. On arrival, in the hotel lobby, we were directed to the 35th floor for check in at the concierge level. We each paid apporximately $30.00 for a fabulous room, with a huge American and Japanese breakfast, with extensive choices, evening cocktails - open bar - and bountiful gourmet appetizers each evening for our stay in Tokyo. My only regret was that we hadn't booked our trip for two weeks!! Pity the programmer who made these input errors. I wondered if the entire hotel was staying for such great prices during their Christmas shopping spree in Tokyo!

Since Sherry and I are both forensic nurses and founding members of the International Association of Forensic Nurses, I had written to our organization to see if there were members in Tokyo who might want to join us for lunch one day. To our amazement, a group of about ten - several doctors and nurses, from all over Japan, came to Tokyo to meet with us. They hosted us to an incredible kaiseki and shabu shabu meal, then, afterwards, out came computers, tape recorders, and cameras as they interviewed us about forensic nursing and sexual assault programs, which they hoped to start in Japan. That was the beginning of close friendships, indeed, international sisters in Japan, for Sherry and myself.

Within a couple of months, I received an article they had written, with photos of us, for a Japanese nursing journal, indeed an honor.

A few months later, Dr. Izumi Takaese, and three of my Japanese nursing colleagues, Nanako Yoneyama, Naomi Kanou and Shizuko Murayama, visited me in San Francisco for five days and I was able to show them all the child and adult sexual assault programs in the Bay area.

Two years later, Sherry and I, and a forensic pathologist colleague, were invited back to Japan, to speak in several locations, as guests of our hosts, in the trip of a lifetime. Japan now has implemented its own sexual assault treatment programs. It is so amazing how things work out in this world of ours. Those four professional colleagues are now "forever friends", even if our paths are not destined to cross again!

I had heard so much about Tsukiji Fish Market, reputedly the biggest wholesale fish and seafood market in the world, I definitely had this on my list of "must see" places.  While in Tokyo, we went every night to the New York Bar at 8PM and stayed for both of Sony's sets, finishing up at midnight, then we'd visit with her for awhile before heading back to the Hilton.  Since Sherry is not an early morning person, we decided to just stay up for our 4:30AM arrival at Tsukiji which was like Grand Central Station at that time.  I've never seen such bedlam and so many different kinds of fish!  By 7AM, we were the only customers at a little restaurant, dining on the freshest of sashimi and drinking sake, nodding and smiling at the sushi chef who, of course, spoke not a word of English but who appeared delighted that we were there and trying such a variety of fish!

be out of the water VERY quickly if it happened to swim near me!

Of course, I enlarged it here but it is quite BIG. If anyone knows the

name, please help me out! 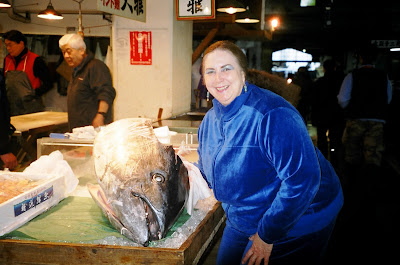 Sensoji Temple in the Asakusa district of Tokyo

According to legend, in 628, two brothers were fishing and pulled in a statue of Kannon, the goddess of Mercy, out of the Sumida River.  They put it back but she kept returning to them.  Sensoji was built as a shrine for her.  The statue is housed here but is not seen by the public.  This Buddhist temple is the oldest in Tokyo and there is also a Shinto shrine here.

Kaminarimon (Thunder Gate) at the entrance to the temple 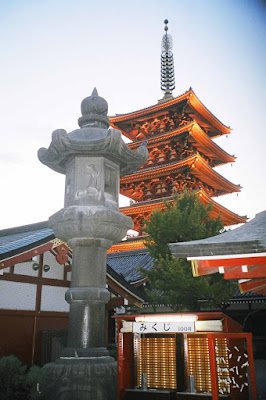 I thought this was a lovely shot showing the pagoda in the background. 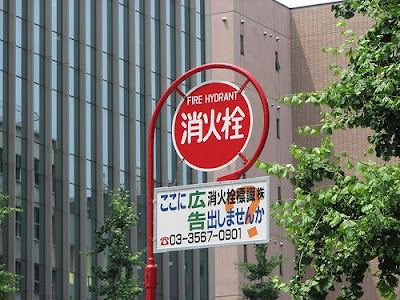 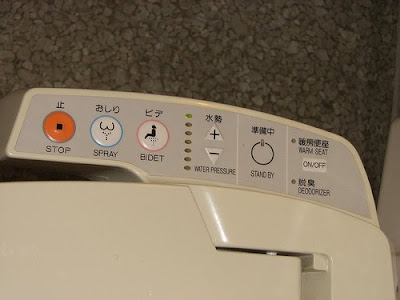 The high tech toilets in Japan were amazing...

seat warmers, some had music to diffuse sounds of passing

Breakfast at the Royal Oak Hotel in Shiga

Sushi at the Royal Oak Hotel in Shiga 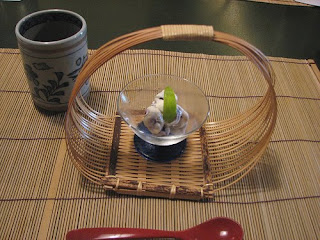 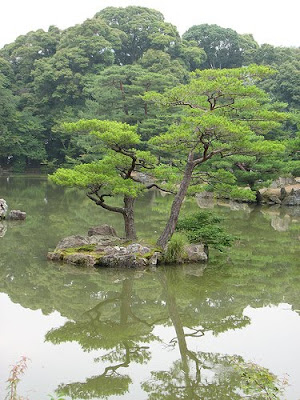 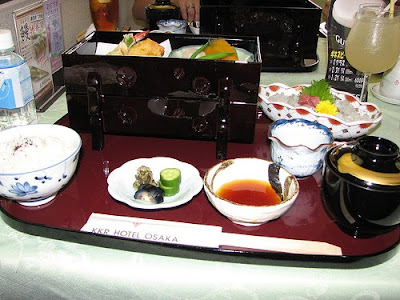 Lunch at the Osaka Hotel

The deepest lake in Japan 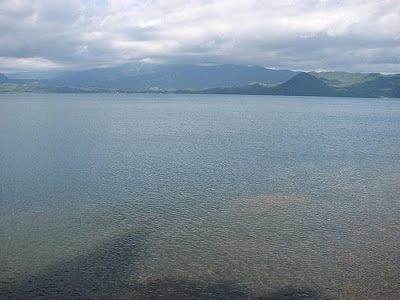