Motorcycles have always frightened me.  As a nurse, I've seen far too many patients
with serious injuries sustained in motorcycle accidents.  There is just so little
protection for riders, even when they are clad in leather jackets, pants, boots,
and helmets.  At highway speeds, weaving in and out of traffic, cars, often, don't
notice them.

In India, motorcycles are a major form of transportation.  In cities like Mumbai,
with a population of 18 million people, one sees entire families on a motorcycle -
father, mother, and two children, sometimes more.  Many areas now have helmet
law but, usually, only the driver is wearing a helmet.  Other passengers - and
the children - are riding without protective headgear.  Even the passenger with
a helmet is too often not wearing it properly.  Chin straps are not fastened so,
in the event of a mishap, the helmet would fly off the driver's head, affording him
no protection at all.  Of course, nurse that I am, whenever I am stopped in a
rickshaw or taxi next to such a driver, I have to say something.  If even one
person listens and learns, I will be happy.

It amazes me that women, in their beautiful saris ride side saddle - or pinion -
as they call it.  Many roads are filled with potholes and they manage to stay
on board, often clutching a baby in one arm while holding on to the driver
with the other.  I just offer up a prayer for everyone on Indian roads and hope
I survive to get home to my California freeways - which aren't the safest places
in the world either! 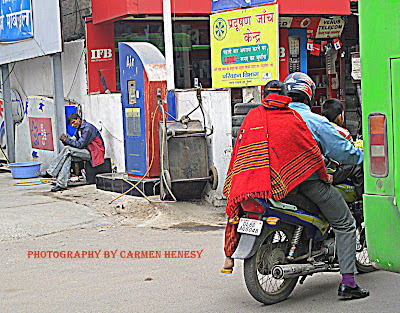 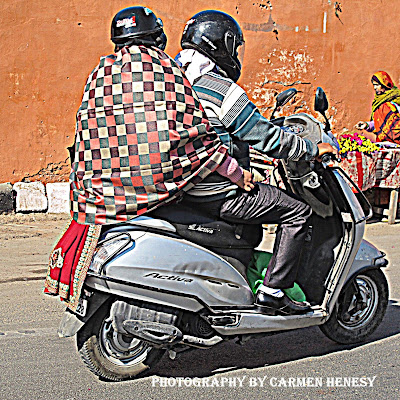 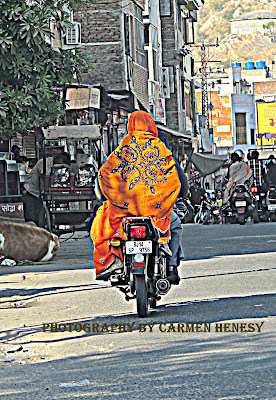 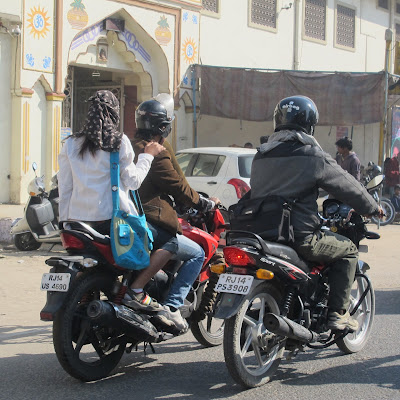 I am participating in
Thursday Challenge.
This week's theme is:  transportation.
Submit your photograph to join in the fun.