It Wasn't Love at First Sight

Okay, I thought the title might get you...but this post isn't about  romance or love at all, at least not about any hearthrob of mine.  It is about love, though - an undying, painful, terribly unsatisfying longing I have for an elusive litte fruit which I have eaten only twice in my sixty-five years!  Most of you, I would imagine, have never even tasted it unless you live in or have visited southeast Asia, India, or, perhaps, Puerto Rico or parts of the Caribbean or South America where, I understand, it is now being grown.  I am talking about the mangosteen - no relation, in any way, shape, form or taste, to the mango - or Garcinia mangostana L, an exotic fruit, known as the "queen of fruits." 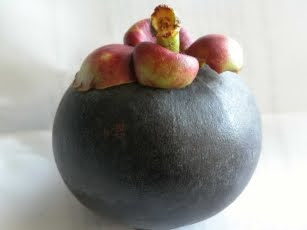 I met my first mangosteen at the Royal Orchid Sheraton in Bangkok, Thailand in February of 1997 ( the date is as important to me as my first kiss ).  I was there overnight, as the guest of Royal Caribbean, prior to setting sail on a twelve day cruise that was to take me to  exotic ports in Thailand, Indonesia, Malaysia, ending up in Singapore.   We were hosted to a buffet luncheon prior to boarding buses for a city tour of Bangkok and the long drive to the port.

I found myself in front of a huge fruit table and enjoyed slices of pineapple and mango, sections of pommelo ( which I had never eaten before ) and paused before a small purplish fruit.  I asked the server what it was and she said, "Oh, it is the queen of fruits, you must try it...it is the mangosteen but is should be called the mangoqueen."  As usual, willing to try anything, I added it to my plate.   I didn't think it looked that exciting, frankly!

When I got back to my table, one of the waiters smiled his approval and came over, took a knife, and cut my mangosteen in half, presenting it to me like a trophy, indicating I should take one of the white segments.  I put it in my mouth, chewed and swallowed.  Oh, my heavens, what was this taste?  Sheer ecstasy, sweet and sour, peach, lychee, strawberry - a myriad of wonderful fruits all rolled up into one.  I finished it in seconds while the others at the table watched.  In spite of my encouragement, not one person went to get one, even when I offered to bring them back as I went for more.  By the time we were leaving for the bus I had finished another three.  Much to my delight, the very sweet Thai waiter handed me a bag as I left the dining room - inside, a half dozen more mangosteens.

Throughout the rest of that southeast Asian cruise, I kept on the lookout, in all the markets I visited, but never encountered the mangosteen again.  Often, at my neighborhood grocery, Manila Market, here in Daly City, CA, I find exotic fruits such as lychee, jackfruit, longan and, even durian, that has been shipped frozen, but, thus far, no mangosteen has arrived.  After investigating, I learned that the United States had banned importing of the fresh fruit because of concern that they might be infested with the  Asian fruit fly which could damage U. S. fruit crops.  Only since 2007, have they allowed the importation of fresh, irradiated fruit from Thailand.  Otherwise, canned products may be imporated but reports are that this does not compare with the taste of the fresh fruit.

In 2008, on my birthday trip to Europe, much to my delight, when we were strolling through Barcelona's wonderful market, La Boquerria, on La Rambla, there, in the fruit section, I saw my beloved mangosteens!  Though a bit expensive, I immediately bought several which I shared with my friends who agreed that, indeed, these were the queen, if not, the king of fruits! 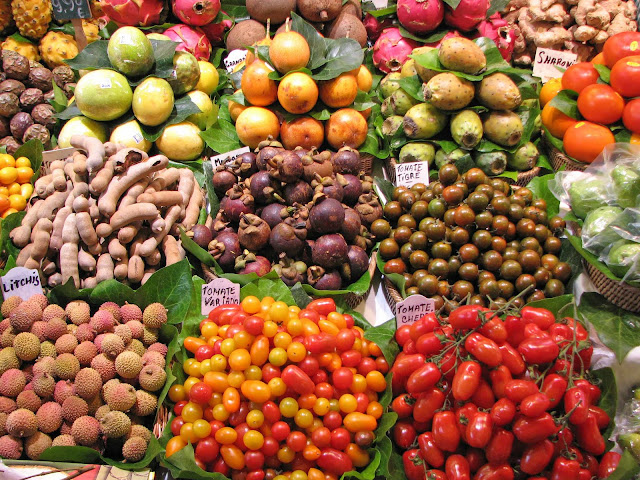 Mangosteens have long been used in Ayurvedic medicine and by native healers.  The rind of the fruit contains a number of complex chemicals, including tannic acid and xanthones.  At one time, when dysentery was very common, it was used to treat this.  Now, China and India used the dried fruits, shipped from Singapore, to make a number of medicines which are used to treat diarrhea, cystitis and to regulate menstruation.  There are claims, as well, that it helps support microbiological balance, helps the immune system, improves joint flexibility, and provides mental support.  Of course, none of this is really proven.

There are numerous websites and links to which you may refer for more information.  In terms of those who often, in desperation, try anything in hopes of seeking cancer cures, please go to:

American Cancer Society - Mangosteen Juice.  That site also has some excellent sources of other articles on supplements.

After writing this today, I was so much wanting a mangosteen, I actually found a place in southern California that imports exotic fruits and, although, it is very expensive, they have fresh mangosteen from Thailand that are sent out express mail the day they arrive.  I just ordered six for my family.  Perhaps I will keep three for myself and give each of my boys one!  After all, they are still young and, in their lifetimes, maybe mangosteens will be much more accesible.