The Daily Border Closing Between India and Pakistan - February 20, 2014 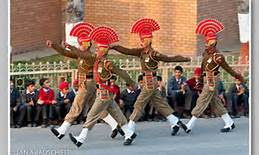 The Border Security Force of India struts their stuff


My good friend, Verena Lukas, sent me this video which I found so interesting, I
wanted to share it.  The video depicts the the Wagah  border crossing between
India and Pakistan.  Since 1959, the Border Security Force of India and the
Pakistan Rangers have conducted this "Beating Retreat' ceremony, just before
sunset.  The lowering of the flags follows a rather theatrical parade by the forces of
both countries.

In the partition of India, which was the partition of the British Indian Empire, which
took place in August of 1947, India and Pakistan were divided into two separate
countries.  There was a massive exodus of people from both countries, with over
7 million Muslims moving to Pakistan and 7 million Hindus and Sikhs moving to
India.  This was accomplished with much violence and slaughter and about 500,000
people died in the exodus. 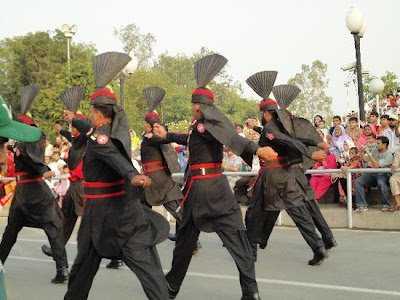 To the present day, the partition resulted in much conflict on the Indian Subcontinent.

While I would like to see this daily border closing, which is viewed by many people
from both countries and countless numbers of tourists, the ongoing outbreaks of
violence between the two countries, keep me far away.  At least, I've gotten to see
the video.

Thanks for sending it, Verena.