I've been woefully remiss in posting for far too long.  So much is going on,
it seems the day is over - and it's well into the night when I finally put my head
on the pillow.  I certainly can't complain, however.  I am almost at my half
way mark of my four month India stay and I am already starting to feel so
sad at the thought of leaving.
Yesterday was Republic Day here,  Though India gained its independence
August 15, 1947, Republic Day marks the date the Constitution came into force,
26 January 1950. I spent most of it at Oberoi Mall. Started my morning at their
spa, indulging myself...hair color, manicure, pedicure, etc...what a fabulous place.
Every treatment had a massage with it and, oh, how glorious that was. As I was
walking out, Salim, a slim young male employee approached me and really made
my day. He said he'd wanted to tell me when I was there three weeks ago and
he couldn't let me leave without speaking to me now. I was  blown away when
he said that he was so impressed with me, that I was such a kind, lovely and
gracious woman, talking to everyone, smiling. He ended his kind words by
telling me, "You must have REALLY been something when you were young,
you are so pretty now." You could have pushed me over and I was walking on
clouds for hours.
Another unbelievable thing happened to me this week.  Sunday morning,
early, I leave for Jaipur, to attend the wedding reception of a blogger
friend, Bharat Kshatriya, of Unseen Rajasthan.  I had planned to leave
from there to go to Delhi on February 1.  An email arrived from Virginia
Lynch, our founding president of the International Association of Forensic
Nurses.  I have known Virginia since that day in August 1992, when
a group of us met in Minnesota to form IAFN.  I often refer to her as
the Pied Piper of our speciality since she did, indeed, draw hundreds of
us into the field.
At any rate, Virginia wanted to know if I was still in India as she would
be in Jaipur from the 1st until the 5th, attending a huge international
forensic conference, at which she would  be presenting!  When I told her
that I was actually going to be in Jaipur and planned to leave on the
1st, she invited me to stay, share her room at the conference hotel and see
some of our forensic colleagues who are helping to bring forensic
nursing to India.  It is such an incredible honor to do so and, in the 3
years since my forensic nursing position with San Francisco ended, I have
been very absent from this world, which was the passion of my life.  At
the end of the conference, I will accompany her to Patiala in the Punjab
where I will, again, be sharing in the world of forensics.
It has to be karma that all this is taking place.  It is unbelievable that I
will be able to combine my love of  India with my love of forensics.
Someone, indeed, is looking out for me.
In the meantime, I've been enjoying life with my friends in my village,
getting out and about in Mumbai and traveling the auto rickshaws like a
pro, rarely even screaming at near misses.  When Oprah was here
recently, her comments about the traffic rivaled mine when I first got
here.  She, too, wondered how seven lanes can converge into one!
Here are a few pictures taken here and there. 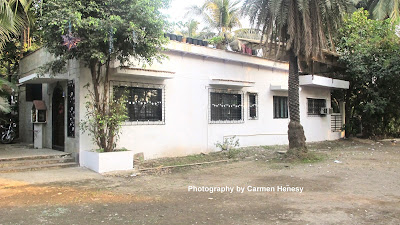 Thia is the Sahar Village home of my friends, Ode and
Lorna Santos and their sons, Nick and Jake.  I stayed here
fourteen years ago, for ten days, when I last visited India. 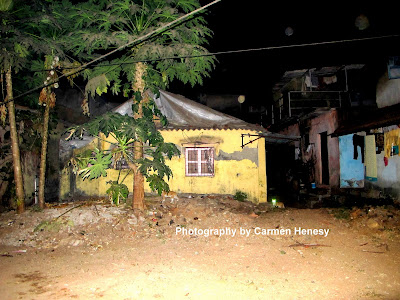 A night time scene across the compound from the Santos home 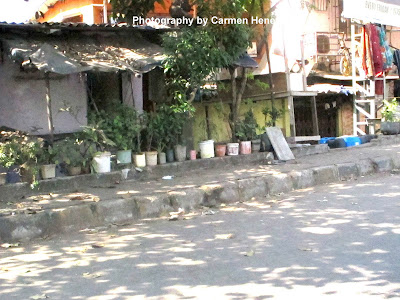 The streets of Mumbai 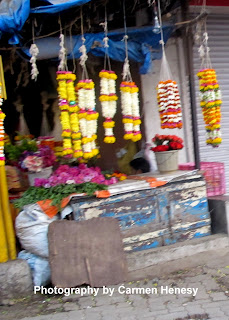 Almost every home I have visited, be it Hindu, Christian,
etc, has an altar - these garlands drape statues, pictures, etc...but
are not worn, lei-like, by people 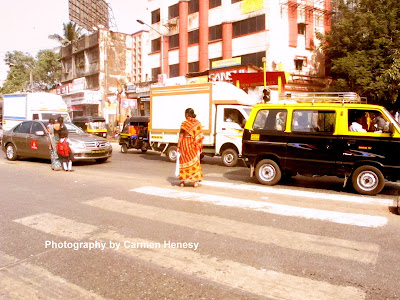 Traffic is unusually light in this photo.  Often, crossing the street is
fraught with danger! 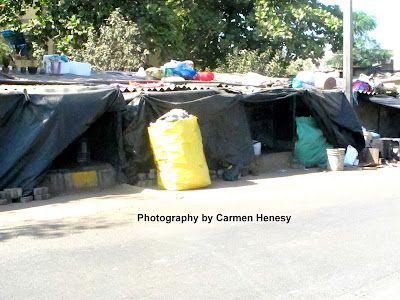 Many people live in these lean tos, raising their children,
cooking meals, making do as best they can.  People are so
resilient here. 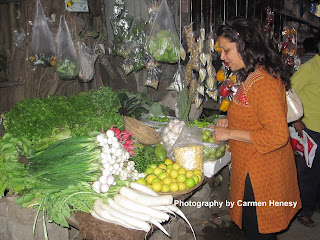 Out shopping for vegetables with Lorna 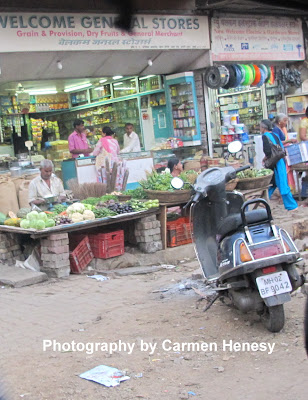 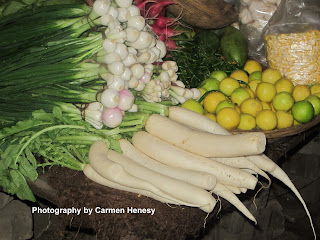 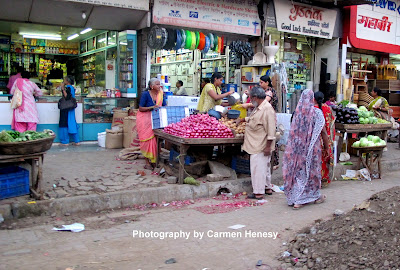 You can see the condition of many of the roads...but, everywhere,
women are wearing the most beautiful saris! 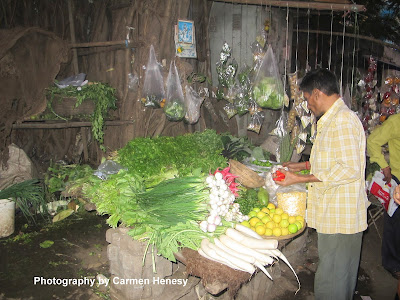 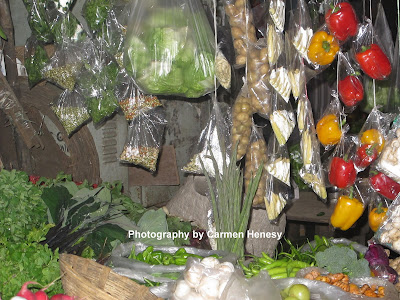 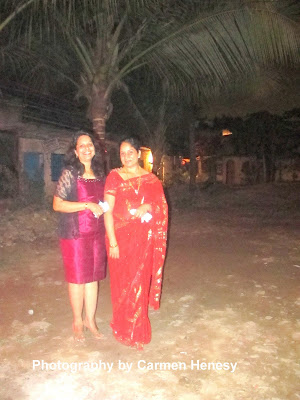 My two "sisters", Lorna and Alma, off to another party! 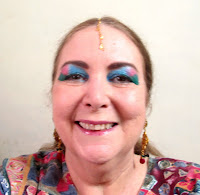