Many of you may have seen past photographs I have posted that were taken by
my﻿ dear Indian friend, Rohan Saraf, who is a senior beverage manager at Royal
Caribbean International.  He is part of my crew "family."  I haven't been able to
cruise in quite some time and it has been even longer since I've seen Rohan but,
he is one of those friends who remain dear to your heart, regardless of the time or
distance that lapse between visits.

Besides being an excellent beverage manager, Rohan is an incredible
photographer. Some of his efforts are of award winning quality.  I've asked his
permission to use some of his shots in my blog and he has been kind
enough to allow me to share his pictures with you from time to time.  If he ever
decides to retire from Royal Caribbean, he could add to his income as a photographer. 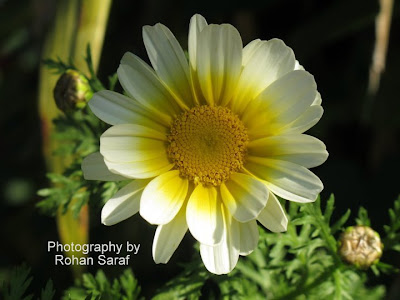 ﻿
I want to thank Rohan for allowing me to use this lovely flower as my Mellow
Yellow post for this week.  Of course, his photo is copyrighted and is the
property of the photographer, Rohan Saraf.  It may not be used in any way without
express permission.
I am taking part in Mellow Yellow Monday - check out
the link and add your yellow post.