This is the second year that I have been in India for Navratri, which means
"nine nights".  This important Hindu festival, which takes place twice a
year, at the beginning of summer and the beginning of winter, honors
the goddess, Durga, in all her nine forms.  The name "Durga" means
"the remover of the miseries of life" and Durga is considered the Divine
Mother in the Hindu religion.

The beginning of Navratri is determined by the lunar calendar.  The nine days
are celebrated differently in various parts of India.  The nine days are divided
into three sets of three to adore three different aspects of the Divine Mother.

In the first three days, Durga, also know as Kali, is revered as a
spiritual force, that destroys evil and grants boons.  Kali is the "fearful and
ferocious form of the mother goddess." 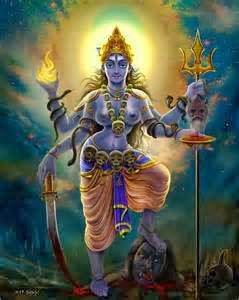 In the second three days of Navaratri, another manifestation of Durga
is adored.  As Lakshmi,she is  the goddess of wealth and prosperity, both
physical and spiritual.  In Hindu households, she is worshipped daily
"but October is her special month".  Lakshmi, the wife of god Vishnu, is
the epitome of beauty.  She is pictured sitting on a full blown lotus, with a
lotus bud in her hand,  Gold coins fall from her four hands which represent
the four ends of human life - dharma or rightousness, "kama" or desires,
'artha" or wealth, and "moksha", liberation from the cycles of birth and death. 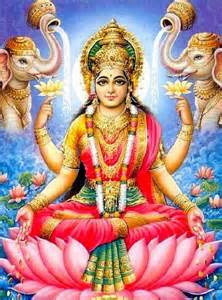 The last three days of Navratri are devoted to worship of the Divine Mother
as Saraswati, the goddess of wisdom and arts.  She is worshipped for divine
knowledge and represents the free flow of wisdom and consciousness.  Her
four hands represent the four aspects of human personality in learning:  mind,
intellect, alertness and ego. 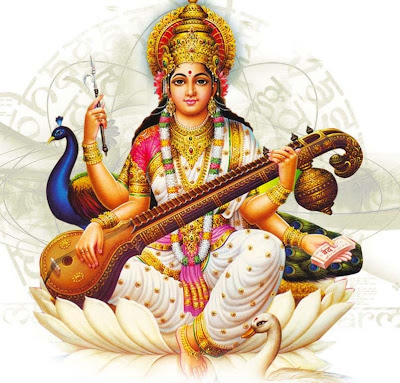 For many Hindus, Navratri is a time of prayer and fasting.  No meat, alcoholic
drinks, grains, wheat, garlic or onions are eaten in many households.  Many
people have only milk and fruits during this nine day period.

Navratri is also considered an auspicious time for new undertakings and
ventures.

The nine day period is also celebrated in many parts of India, especially the
state of Gujurat with music and dance.  Garba and Dandiya Raas originated
as dances in honor of Durga.  The dance represents a battle between Durga
and Mahishasura, the demon king.  Dancers whirl about and move their
arms and legs in a prescribed choreography to music, usually enhanced
by the dhol, a percussion instrument, as well as the dolak and tabla.

The sticks used in the dandiya represent the swords of Durga.  Women
often dress in beautiful ghagra choli and dupattas, some wearing a
different color every day and they use their finest jewelry.  Men have special
turbans and kedias.

The garba consists of hand and feet movement and is usually danced before
Aarti, a ritual of worship of the goddess, Durga.  Garba can be danced by any
number of people.

Dandiya Raas is usually danced ater Aarti and it is a dance of merriment.
Most dandiya steps require two people and men and women dance in two
circles, one going clockwise, the other counter clockwise.  To a four beat
rhythm, the dancers hit the sticks at the same time.  Contrary to popular
belief, not all dandiya music is fast. 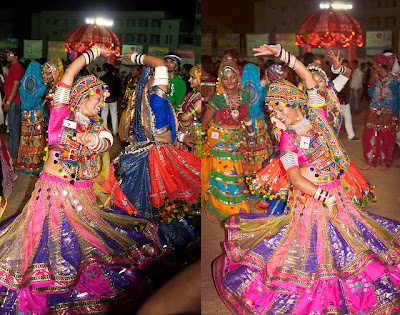 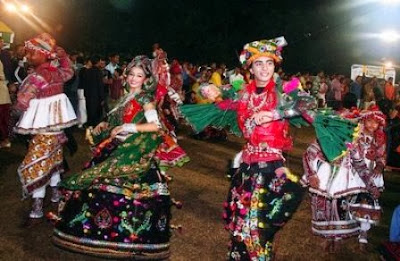 To see the dances, watch the YouTube videos below.  The garba and raas
dandiya are now being danced internationally and there are world-wide
competitions to determine the best dancers.

My dream has always been to go to Baroda in Gujurat, duing Navratri.  The
government sets up nightly festivities, some held at major venues where
dancing goes nonstop for several hours, with a whirl of colors, the clash of
sticks and joyful participants/


Resources for information in this article: