Recently, in Facebook, I was contacted by an adolescent boy I had mentored when
I first arrived in San Francisco over 36 years ago!  He wanted to thank me for being
so kind to him and for my patience and tolerance.  He went on to become a respected
engineer, not that I had a thing to do with that.  It is always nice, though...when
someone says thank you, after a quarter of a century.

This young man ( well, now about 50 ) is in the Bay area for a few weeks, visiting
from his home in Hawaii and we met for lunch at my favorite Thai restaurant in
San Francisco, Manivanh.  We sat there and talked for nearly four hours!  His
memory is so much better than mine, that's for sure.  He was able to recall all of the
folks that worked in the mentoring program and all the other kids that participated.
For a short while, all the years fell away and I was just starting life in this city by
the Bay!!  What a fun day it was.

I had another nice surprise, too.  Years ago, when I was eating at Manivanh, I told
the owners that I wanted to have a special dish with green beans, eggplant, and a few
other ingredients...but there wasn't one specifically like it on the menu.  "No problem,
we'll fix that for you!" Next time, I came in, Sam asked, "Do you want your
Carmen's special?"  I've eaten it so many times over the years as have other people
with me, then it spread to friends of friends, medical folks from San Francisco General
until today, I looked at the menu and, lo and behold:

This was my view as I headed out today from my temporary residence at my
friend, Silvia's house: 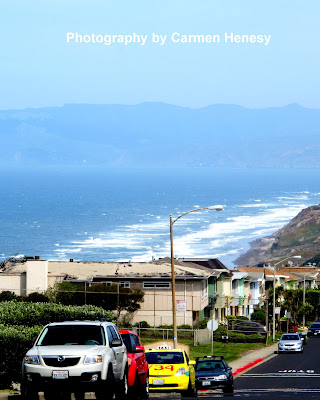 With that view, it's hard to remember there is misery and anguish in much of the
world.  I offered a prayer for world peace and an end to hunger and suffering
and thanked God for my fortune in life.

It is always so soothing and serene at Manivanh.  Since their post-Thanksgiving
fire several years ago after Thanksgiving, they rebuilt and redecorated and I love
the special touches that bring the feel of Thailand to the Mission. 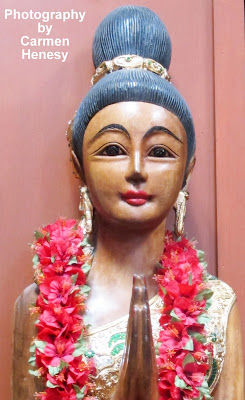 Except that she is Thai, I almost feel I should be saying "Namaste" 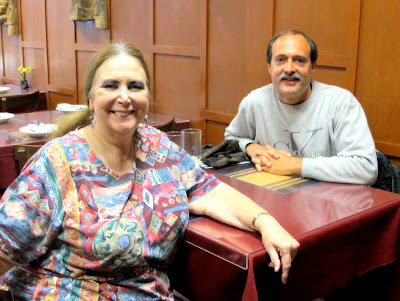 Here I am with my friend, Jeff, for the first time in over 35 years,
thanks to Facebook.